The relationship between cats and guinea pigs can best be described as complicated. While many animal species can exist peacefully in the same environment, pairing a cat and a guinea pig requires proper planning and patience. Cats are predatory by nature and will see the guinea pig as prey. They also mark their territories. If a cat regards a guinea pig as a potential danger and an intruder into its territory, it can become aggressive and attack the guinea pig. On the other hand, guinea pigs are delicate and may not be able to counter or withstand an attack from cats.

You may already have a cat and want to introduce a guinea pig into the picture but wondering if they can live together. To answer your question, let’s explore a few points:

Cats are smart and become alert when a new species is introduced into their environment. Guinea pigs, on the other hand, act out of instinct. When a guinea pig is initially introduced to a cat’s environment, the cat will, at first, be unsure of how to treat it and may even be afraid of it. You may think that this is your cat’s way of welcoming the guinea pig into its space. But don’t be fooled because as time goes by, your cat will become familiar with the guinea pig and begin to see it as prey. The best thing to do would be to cage pet guinea pigs away from cats, at least initially, before the animals familiarize themselves.

How Do You Introduce The Pets?

The earlier the animals are introduced to each other, the better. This will allow them to grow together and forge a friendship. Cats are known to easily interact with other species between the ages of two to 10 weeks because that’s when they are at their socialization stage.

It’s necessary to start the relationship between a guinea pig and a cat through familiarization. When you bring a guinea pig to your house, make sure it stays in a secure cage in a different room away from the cat. Then slowly start to make your cat aware that a guinea pig is present in the house without letting it see the guinea pig. You can do this by putting the cat’s food near the door or the area where the guinea pig has been placed. If the cat seems uneasy and exhibits predatory behaviour, remove it from there. Repeat this until the cat gets used to the guinea pig’s presence.

Next, allow the animals to see each other briefly by placing your cat where it can see the guinea pig but can’t reach it as you pet the guinea pig. You should thereafter have someone pet the guinea pig as you calmly hold and pet your cat. This should happen in the same room so that you can observe your pets’ behaviors even as they get used to each other. When the animals get calm enough, reduce the distance gradually. When you get to the point where the animals are docile enough to enable you to sit side by side, cross-pet, and even exchange the animals.

A word of caution, even if your cat gets to the point of being friendly with your guinea pig, never leave them alone unsupervised.

How Do I Protect My Guinea Pig From My Cat?

As already mentioned above, cats are hunters by nature, and if your cat is left alone with your guinea pig, it may result in the guinea pig’s tragic end.

To protect your guinea pig from your cat: 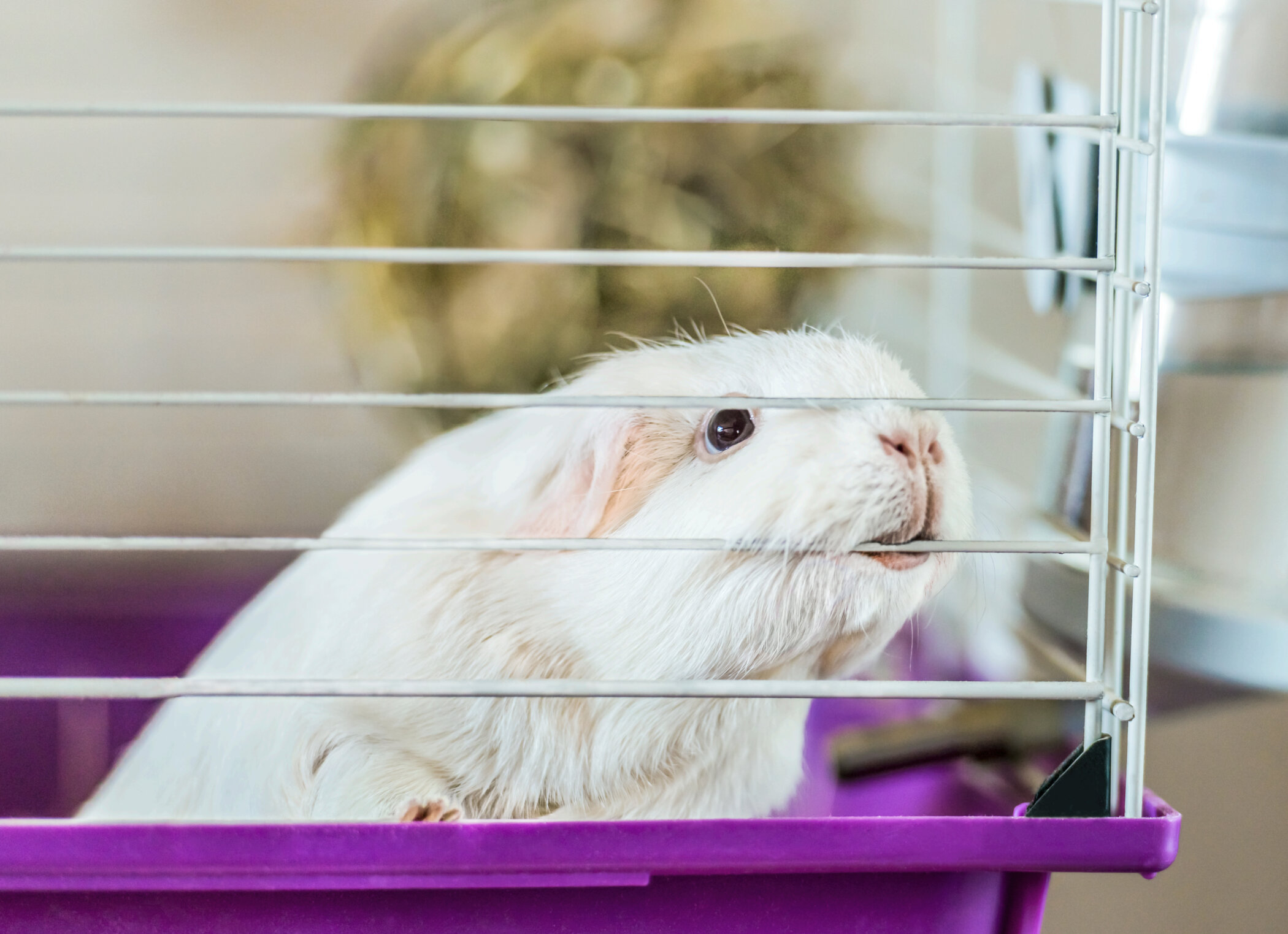 Can My Cat Attack My Guinea Pig?

Your cat’s behavior will determine the course of the relationship between it and the guinea pig. Cats develop temperaments that are determined by the environment they grow up in. Their characteristics are grouped into five personality types:

Cats brought up in relatively calm and safe environments developing good characteristics. They’re confident, affectionate and gentle. Cats that are raised in unfavourable conditions, on the other hand, tend to display impulsive, neurotic or dominant behaviour. So instead of getting an older cat and trying to learn its personality, get a cat while still young so that you can influence its behaviour.

However, keep in mind that whatever personality type your cat belongs to, it’s still a predator and still possesses the predatory instinct to hunt and kill. Cats are also relatively rough compared to guinea pigs, and what your cat may consider as playing may sometimes be harmful to the guinea pig. The cat may even misinterpret something the guinea pig does as a threat. This may cause the cat to react to perceived danger by attacking the guinea pig. You’ll only be sure that your guinea pig is safe when it’s locked away in its cage or when you supervise its playtime with your cat.

Even though both animals have the potential to pass diseases to each other, cats aren’t exposed to any health risks from guinea pigs. It’s, however, important to have the animals checked by a vet regularly so that if either of them is ill, their contact can be stopped for a while to minimize transmission.

Can Cats Be Allergic To Guinea Pigs?

Cats are usually not allergic to guinea pigs. If your cat seems to get irritated every time it’s around the guinea pig, the problem could lie elsewhere. The guinea pig’s dirty furs or bedding or even the food it eats could be the cause of your cat’s allergic reaction. Guinea pigs ought to be cleaned regularly, and their beddings changed frequently to avert the spread of germs and allergies, especially from their shed furs.

The friendship between a cat and a guinea pig may not be the most natural because naturally, cats and rodents don’t co-exist. The cat would view the rodent as just a step away from the food chain. But that doesn’t mean that they can’t interact in arranged and supervised spaces. Introducing them to each other at an early age can make things easier. With good planning and patience, a cat and a guinea pig can get used to each other’s presence and live together in the same environment. However, just one act of carelessness on your part can make things take an unexpected turn, leading to a sad ending.