It was Rudie’s luckiest day ever! The day he was rescued by his own personal angel, Melissa. It’s not just that Rudie had found a loving companion for life, but also someone who had a special love and understanding for blind kitties and those who need a little extra help in life.

Melissa hails from North Carolina and has loved animals all her life. Among her summer jobs during high school, she worked at a dog boarding business and then moved to a local veterinary hospital. A few years later, she worked for The Cat Hospital of Durham and Chapel Hill, a feline veterinary hospital where she met quite a few blind cats and kittens and learned a huge amount about cats and their health and care. The blind cats found a special place in her heart. In fact, she came to love them so much that she even fostered a blind kitten for a time.

When she was grown and out on her own, Melissa adopted a wonderful cat named Nykki, who was her “soul cat.” Because he wasn’t fond of other cats, he was the only cat she had at the time, which was fine with Nykki! After 18 great years together, Nykki crossed the Rainbow Bridge in January of 2018. Through her heartbreak at losing him, Melissa felt the emptiness in her house and in her heart and knew she would need to adopt again.

From her experience at the feline hospital, Melissa knew she wanted to adopt a cat that might have a harder time getting adopted, that is, one with “special needs.” She began to search area rescues, PetFinder, social media and online searches to find that one special cat that really needed her.

After a couple of months of searching, Facebook opened the door for Rudie and Melissa to meet. A friend of a friend shared with Melissa a post she had seen from an animal rescuer in rural Georgia who had saved a tiny kitten sitting alone in a yard. It was mid-July, very hot, and the four-week-old kitten was not well – it was clear his right eye was permanently damaged and the left eye not in much better shape. 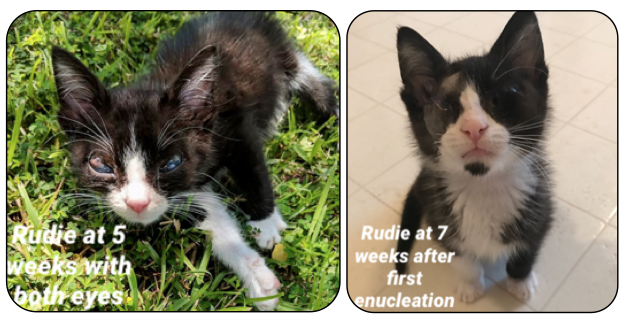 Melissa lost her heart to Rudie right then. The rescuer was very careful about who was going to adopt this kitten, which was fine with Melissa, who understood the need to make sure he was going to a safe and loving home. They finally agreed to meet half way between their homes, which was Savannah, Ga. Melissa wasn’t sure what she was going to find when she finally met this special kitten.

As it turned out, in addition to his very bad eyes, Rudie had flea infestation along with the anemia that it brings, matted fur, worms, and, because he had been eating dog food, his system was constipated. Melissa is certain that this rescuer saved Rudie from certain death given his very young age, his health and the fact that Georgia in July can be murderously hot. Her first action was to make Rudie comfortable in her car while she went to get what she needed to start dealing with his flea infestation.

A trip to the feline hospital told Melissa things with Rudie’s eyes were pretty dire. The vet confirmed that he needed to have his right eye removed, however, there was concern because he only weighed 1.8 pounds, which is underweight for surgery. Given severity of his eye damage, they all agreed it was necessary to go ahead with the surgery. Happily, Rudie came through just fine. Then it was time to see if they could save his right eye, so Rudie and Melissa were referred to a nearby animal eye-care practice. There, he was diagnosed with feline eyelid agenesis, a condition where the lids don’t form properly, and that Rudie needed reconstructive surgery to help save it. First, though, Rudie had to gain some weight, so they would wait several months for that.

Around that same time, Melissa had to travel for work. To make sure Rudie had his regular three-times-a-day doses of the three eye medications he was on, she boarded him at the vet. She knew they would take excellent care of him. As Melissa took him for boarding ahead of a July work trip, he somehow damaged his eye in his carrier, which caused him to need the right-eye surgery right away. Even though she was sick with worry about Rudie, Melissa had to go on her business trip. There is a very happy ending since the vet took great care of Rudie and he came through the surgery just fine.

They went through so much together at the start of Rudie’s life with Melissa that these two are inseparable now. Even with no sight at all, Rudie “just got on with his life and recovered,” Melissa says. He inspires her every day and reminds her that there’s no need to worry about limitations and that bad things in life can be overcome. Looking at Rudie’s smiling face and happy demeanor, it’s clear he has the best life possible!

Melissa thinks blind cats make the most inspiring pets, which is ironic since so many are euthanized in shelters. She admires the way they overcome their lack of sight and use their other senses to the point where they can become even better hunters and bug trackers than cats who can see. One of Rudie’s techniques for this is to tilt his head up to make sure his ears are positioned to catch the most sound possible. She also admires Rudie’s bravery in facing the world, when every leap off a chair, bed or couch goes into something unknown.

From her experience, Melissa knows that sounds are critically important to blind cats. She communicates with Rudie through sound, tapping on the floor or snapping to let him know where she is exactly and that she wants him to come to her. Now, when Rudie hears a tap, he goes right to her. Taps, snaps and other sound cues help blind cats map out their surroundings. Melissa noted that spacial memory is very important for blind cats, too. They need time to explore their homes and figure out where the big pieces of furniture, stairs and thresholds are. Once they do, they remember!

Melissa and Rudie are truly meant to be together and they inspire others to adopt blind cats! Thank you, Melissa, for being such a wonderful cat mom to Rudie and for helping him have such a wonderful life! 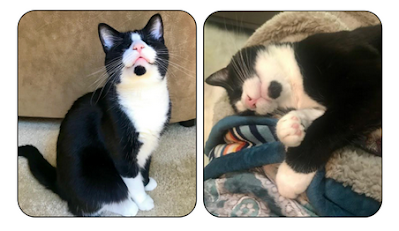