Taking care of a lizard can be overwhelming, especially for first-timers. It becomes even more challenging when you have another pet at home, such as a cat.

Cats and lizards can live together. Nonetheless, building a harmonious relationship between the two may not happen overnight. It takes time, and more importantly, it requires a proactive approach, making sure that the two will co-exist.

If you are planning to introduce a lizard to a household with a cat or vice versa, read on!

Tips and Tricks for Cats and Lizards to Get Along

Cats eat lizards. This is often the primary concern among people who want to introduce a reptile into a household with a feline. Nonetheless, with the right approach, you do not have to worry that these two pets won’t be getting along. Below are some of the best things you can do.

The first and perhaps most important consideration is the type of cats and lizards that you will choose. Look for friendly but non-aggressive cats. This way, the tendency that the cat will eat your lizard is minimal.

Among others, one of the best breeds to introduce in your household is a Siamese cat. It is known not just for its piercing blue eyes but also for its gentleness. They are chatty and attached, making them great for humans who crave the attention of their pets. Many are calling it the quintessential people cat. It is friendly not just to humans but even to reptiles.

The Norwegian Forest Cat is another great option, which is known for being adaptable. While it is a curious creature, it is cordial when around children and animals. While their name has “forest” in it, they are far from being wild or untamed.

Another great cat to have at a home with lizards is the British Shorthair. Even if they love having their feet on the ground, they are not hostile.

While the choice of cat is crucial, it is equally important that you find the right kind of lizard. One of the best is a bearded dragon. They have an even temper and they do not bite, so you can expect that they will have a peaceful relationship with a cat.

It is best to avoid large lizards that can be too aggressive and dangerous to cats. Some species can also be toxic when eaten. Avoid having a Gila monster as it can have a poisonous bite. Tegus and monitor lizards are also not good choices because of their aggression, which can scare cats.

While it is perfectly safe for most cats to roam around the house and live without a cage, the same thing does not hold true for lizards. They require an enclosure, which is also one of the best ways to make sure that they live peacefully with your feline pet.

Make sure that the enclosure suits your lizard. Comfort is your priority, so choose a home that is large enough for the reptile to move freely. You also need to provide hiding spaces and décor, which will prevent lizards from being nervous in captivity. Proper lighting is also a must.

Cats and lizards can admire each other even with an enclosure between them. This will prevent one from physically assaulting the other. The enclosure acts as a barrier that limits any potentially dangerous interaction.

An enclosure does not only help build a harmonious relationship, but it also makes the life of pet owners easy. For instance, it makes cleaning a breeze. This is because it contains lizard dirt in a single place, including bearded dragon shed and poop.

Aside from having an enclosure, you should also keep them in separate rooms, especially when you are not around. Your safest bet is to give each of them their space, which will prevent the pet from being territorial. Otherwise, one of them might find the need to defend their place, especially for species that are known for their aggression.

Keep an eye on the interactions of cats and lizards. They might seem cordial, but you must look for any stress signal. Watch out for how they are when they are apart and when they are together. If you feel tension, separate them immediately.

Be wary of reptile emotions. The two most common emotions that they show off are fear and aggression, especially defending when they are around other animals or when they feel they need to their territories.

Some of the most common signs of aggression or stress in lizards include a bobbing or shaking head, whipping or raising the tail, shaking body, enlarging throat, licking tongue, arching back, and a hissing sound. They will show these signs once they are uncomfortable around cats.

Meanwhile, for cats, some of the most common signs of aggression include dilating pupils, flashing tail, and growing or hissing. Once they demonstrate any of these signs, expect that they are ready to attack anytime, and hence, they might turn hostile towards lizards.

To make sure that lizards and cats will get along, do not force their co-existence. As soon as you notice the things mentioned above, keep them away from each other. Do not wait until one attacks the other.

When a cat attacks a lizard, or the other way around, an injury is possible. Their sharp claws will not only cause scratches, but they can also transfer bacterial infections. Declawing cats may not always be an option since it is illegal in some states. 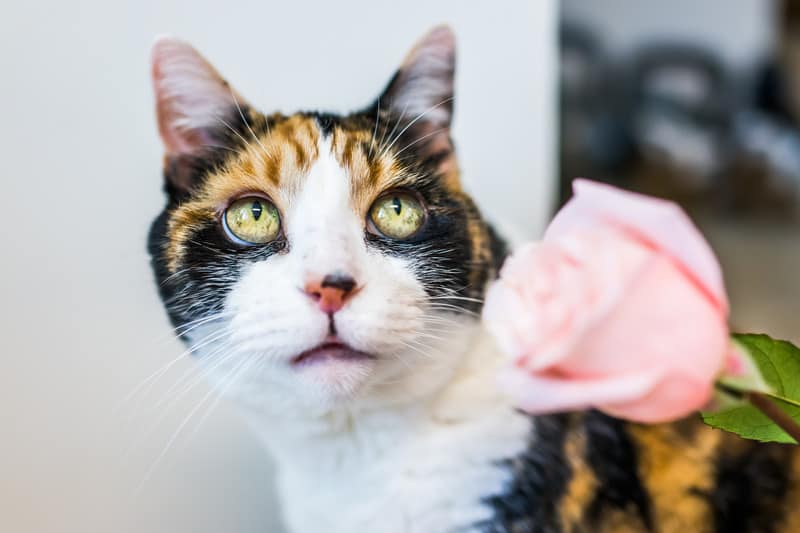 Introduce Them to the Smell of Each Other

Both lizards and cats have a strong sense of smell. You must learn how to use this to ensure a harmonious relationship in your household.

During their first meeting, the cat and lizard will smell each other. Each pet should be held by one person, making it easy to pull back when a sign of aggression is present. Through the days, the two pets will already be familiar with the smell of each other. It reduces the possibility that they will turn hostile during their successful meetings.

Once they are ready to be together in one space, see to it that you create a comfortable environment. This way, they can be more cordial and not hostile. If the surrounding is stressful, the two will not get along.

The temperature is one of the most important requirements. It should not be too hot or too cold. Even the lighting matters. Plus, there should be no loud sound. Get rid of anything that can cause stress to the cat and lizard during their encounter.

Avoid bringing the cat and a lizard to an open area where it will be difficult to chase them. There should also be no dangers around, such as chemicals that they can accidentally ingest when they are too fast for you to run after.

It may take some time before cats and lizards are comfortable with the company of each other. They might need to meet several times before they can finally play without the reptile being in an enclosure.

They will figure out whether they are friends or foes. The more familiar they are with each other, the easier it is for them to realize that they can co-exist. As earlier mentioned, one of the best ways to do this is to acquaint them with their sense of smell.

For the lizard and cat to build a good relationship, you must say vigilant. If they seem to hit it off during their first meeting, it does not mean that they won’t turn hostile the next time they are together.

The best thing to do is to not leave them unattended. Be there when the two pets are playing. When you notice any sign of stress or aggression, immediately separate the two before they attack. The sooner you act, the lesser the potential hazard to the two pets when there is any hostility. 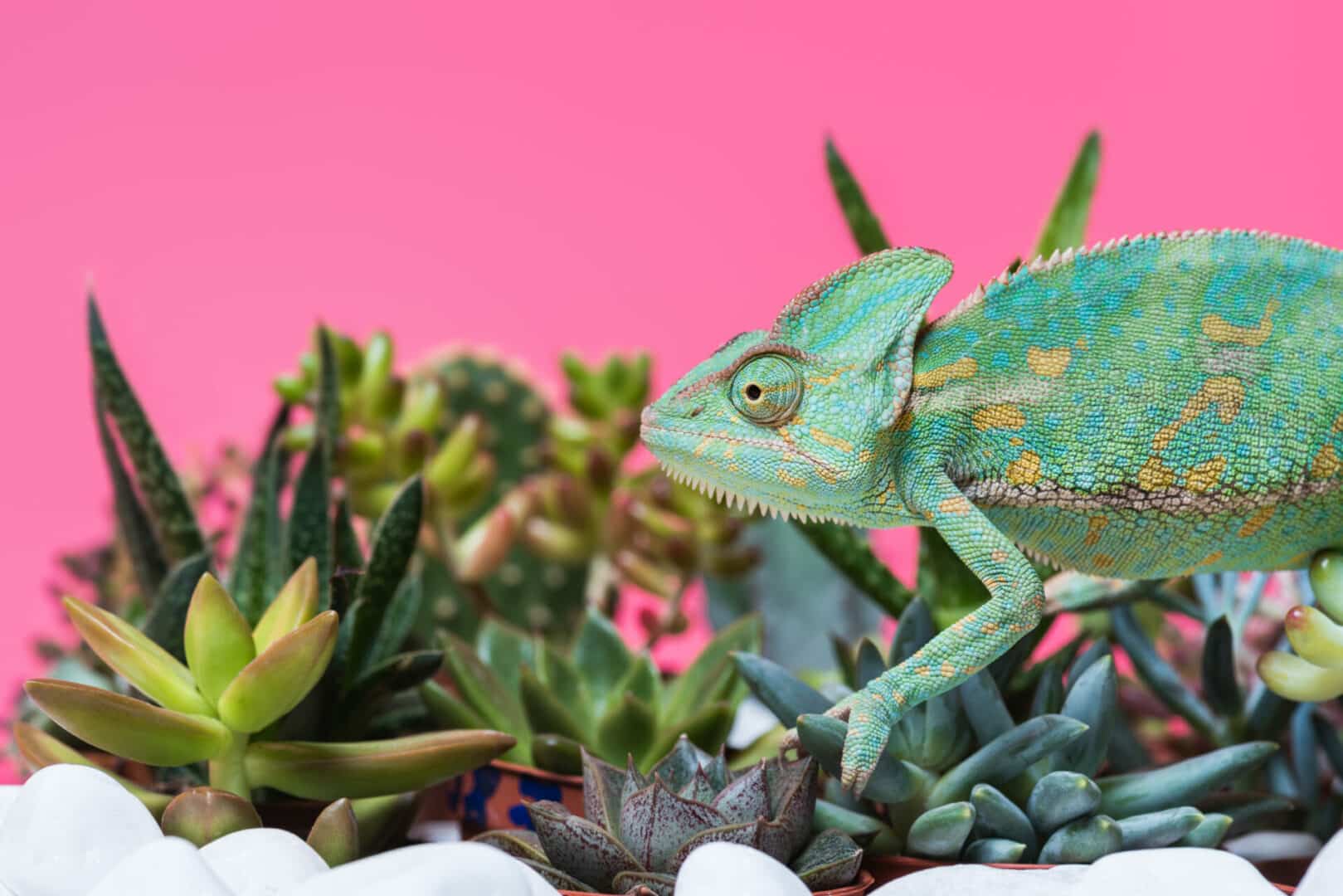 Cats and lizards are two great household pets. However, the two may not always get along. They can fight and turn hostile, especially in the absence of supervision. Aside from getting an enclosure for your lizard, you should also know how to interpret their stress signals and make them familiar with each other through smell.

Jennifer Munsell is the resident writer of Reptiles Life. She’s a cat and reptile lady, who loves nothing more than spending her days writing about the antics of her furry and scaly friends. When she’s not writing, she can be found reading (especially books about reptiles), playing guitar, or watching horror movies. She’s an introverted homebody who loves nothing more than staying in with her cats and snakes.