In February 2021, Dr. Susan Whittred, the Veterinarian and Executive Director of the Patricia H. Ladew Foundation reached out to Square Paws about renovating the cat sanctuary portion of the main “house” at their property in Oyster Bay, NY. Susan had seen what Square Paws had done in the Billy Joel rooms at North Shore Animal League America, and she contacted her friend, Dr. Jenny Conrad, founder of The Paw Project, to see if she knew who “Square Paws” was.

As luck would have it, Square Paws is friends of Jenny’s and avid supporters of The Paw Project, so Jenny was only too happy to make this connection! Square Paws had briefly met Susan at the first CatCamp in NYC in 2017. Right after CatCamp finished, Jenny and Susan drove to Albany, NY to speak about a bill on the subject of cat declawing and how it should be banned. Several years later in 2019, New York State passed the bill as law making the declawing of cats illegal! Dr. Whittred serves as the New York Director of The Paw Project. Moreover, Ladew had an in-house Paw Project spokescat named Rubio who was useful in teaching NY legislators that declawing is really an amputation and not a toenail clipping.

Suffice it to say, the prospect of working on the Ladew cat-room makeover was enticing!

The first order of business was to discuss what the scope of the project would encompass. Dr. Whittred stated that there were two rooms on the Ground Floor to be renovated, and, of the four rooms in the Basement, they wanted to renovate two of them.

Ladew already had a general contractor named Roland Gerwald on board to do some upgrades to the rooms in the house, like change out old through-wall AC units with new, more energy-efficient split system units. So a few Zoom calls ensued to discuss possibilities of this renovation.

Square Paws proposed to Susan and the Board that we do a kind of “retrovation:” to renovate, but in a way that was very retro in style, and to make it seem like the cats were just an average suburban family that owned this house . The design intent was to have it to appear somewhat “locked” in time, somewhere in the 1970’s with various fixtures and furniture that were eclectic of the 50’s, 60’s and 70’s, mostly in a mid-century modern style. And the fable created was that the husband of this cat-family was an Oyster Bay fisherman (a somewhat bygone occupation in that area these days).

Oyster Bay is famous for the nearby Sagamore Hill National Historic Site, which was the home of Theodore Roosevelt. As is common with historic sites, rooms are preserved “as they were” when the person lived there. This also played in to the design concept. Although what was created was hardly how the house “was” when Pat bought it, Square Paws wanted to emulate that impression when people visited. 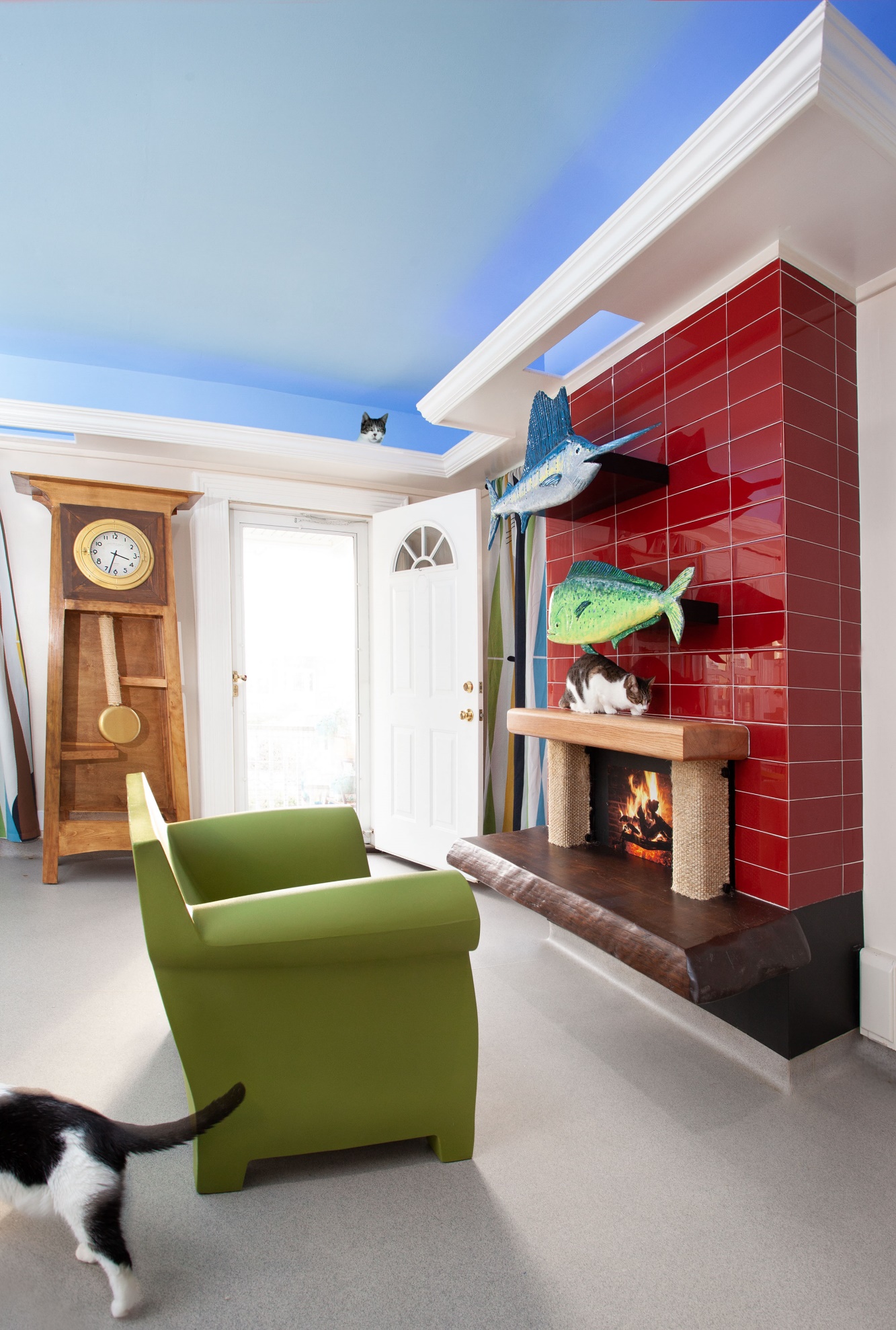 Susan and the Ladew Board of Directors were extremely open to ideas and concepts that would make their sanctuary special and unique. Patricia Ladew, who passed away in 2002, was an heir to the Standard Oil fortune. Although Pat had broken away from her family’s pedigree and blazed her life path as an artist, she unexpectedly found herself as an heiress in the 1970’s and decided to use her inheritance to buy an old house, pay two caretakers to live upstairs, and have the downstairs reserved for homeless and special needs cats that she and her friends had been rescuing in the New York/Long Island area. The NYC tabloids labeled Pat an “eccentric” heiress, which was an unfair exaggeration. To allow cats to roam the house freely was a forward-thinking idea in the 70’s; Pat was way ahead of her time! 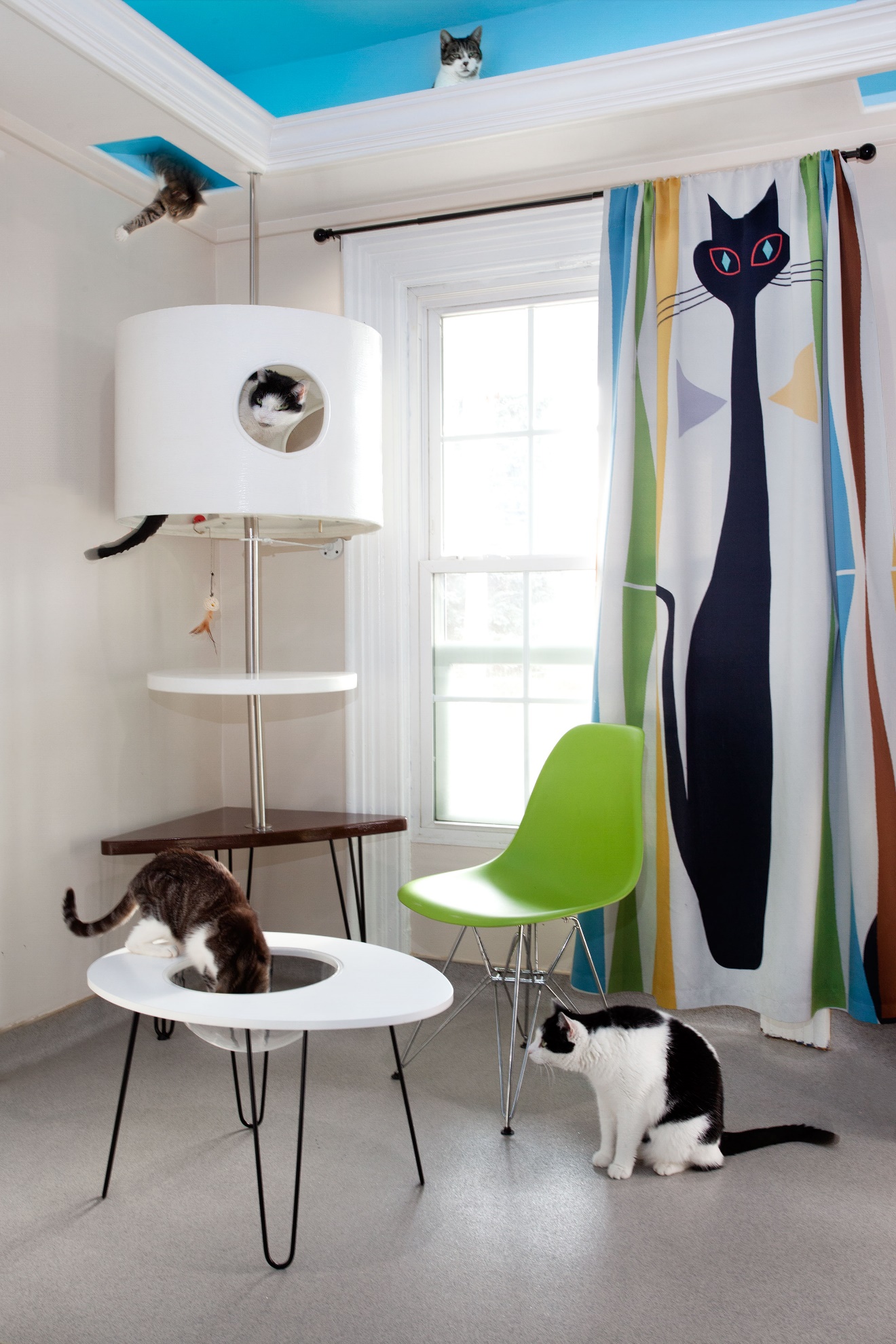 After a few weeks of pondering, Square Paws proposed the following specifics:

The ceilings of the Living Room and Kitchen would have bright paint colors, and the old cat-runs that sat at the tops of the windows would be raised slightly and be clad with a crown molding, as if to seem like it had always been part of the house.

An existing cat-staircase in the Kitchen was taking up space and seemed better suited in the Living Room. Thus, Square Paws designed the new “stairs” as a kind of suburban staircase with shelving below that would house a combination of cat-beds and nautical-themed books. 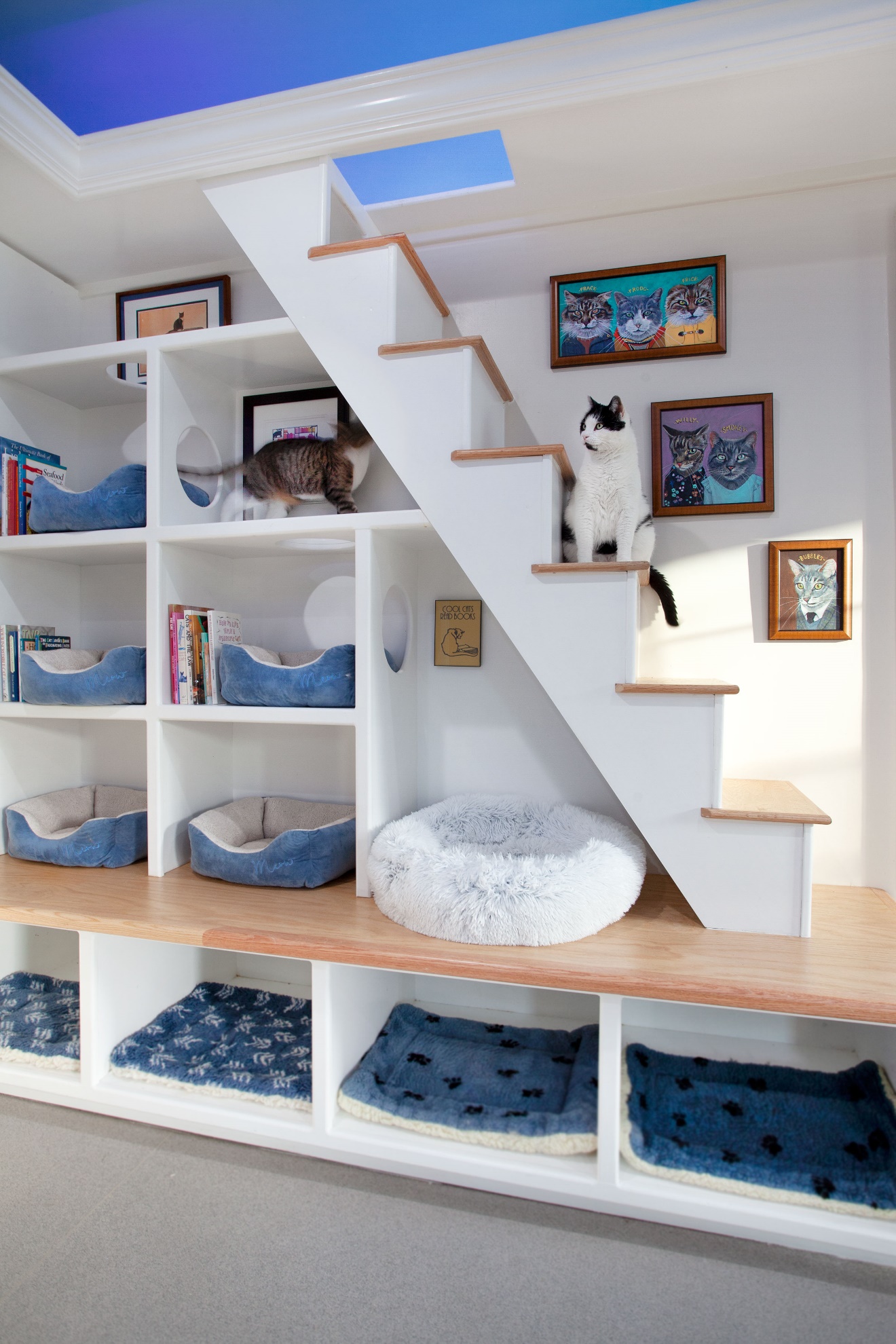 To complete the feeling of “homey-ness,” Square Paws designed a faux fireplace with the husband-cat’s prized catches mounted above the mantel…fish that would double as cat-shelves. A grandfather clock, a mid-century modern “captain’s desk” and a climbable corner table lamp would round out the Living Room. In addition, there would be a Victorian-style birdcage/cat cage for when Ladew would need to introduce a new cat or contain a cat that required special attention. 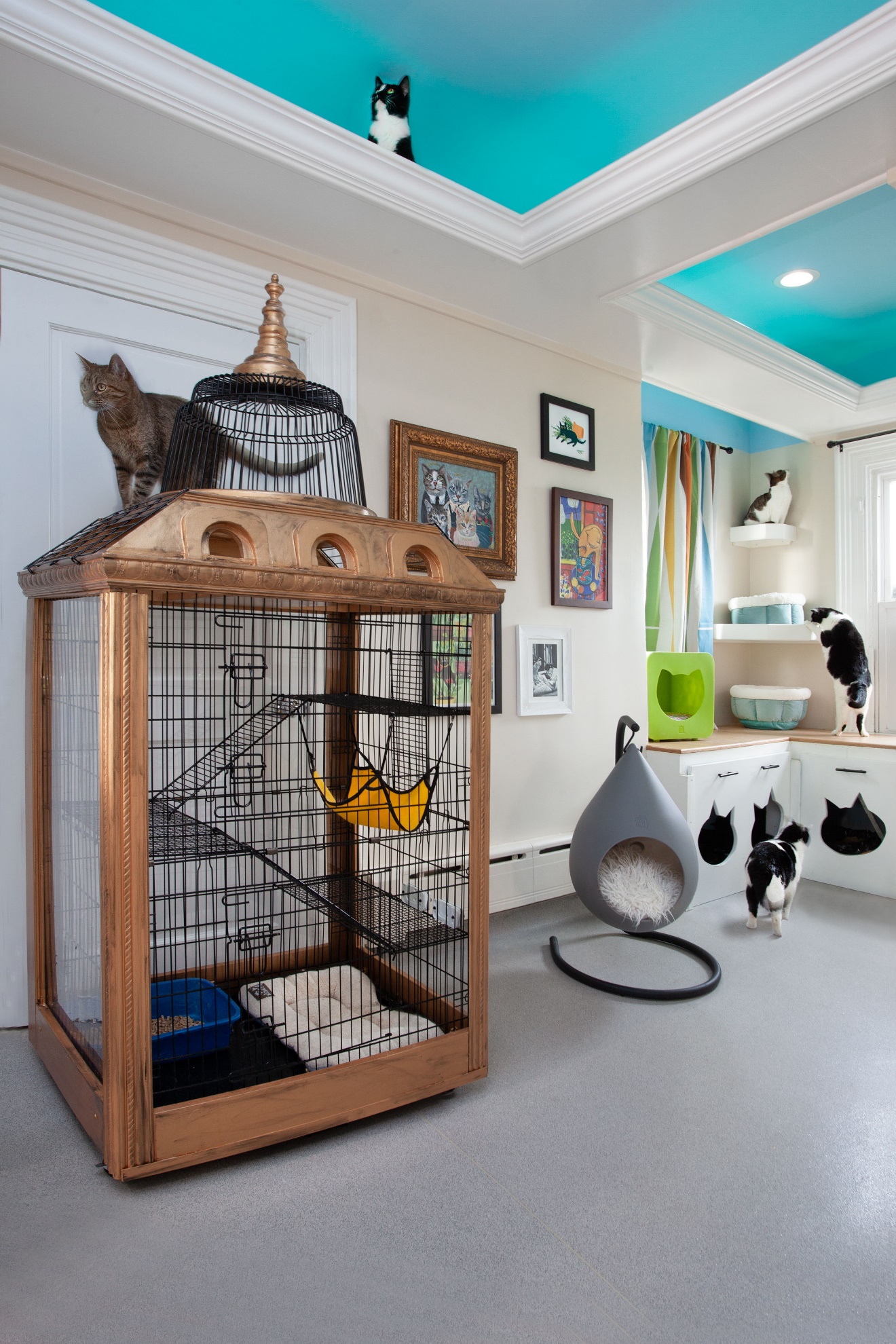 The Kitchen would have a new blue tile backsplash with new counter and base cabinets. This would be complimented with catified upper cabinets, a faux double wall-oven, a retro catified telephone, a bright red retro fridge, and a center kitty dining table, custom-made to work with Ladew’s metal bowls. The table would be in Ladew’s signature green, representing their commitment that all cats are welcome and nourished here. Square Paws also paid homage to one of the original resident cats named Florence who lived for five years atop the refrigerator. The fridge brand was thus aptly after her. 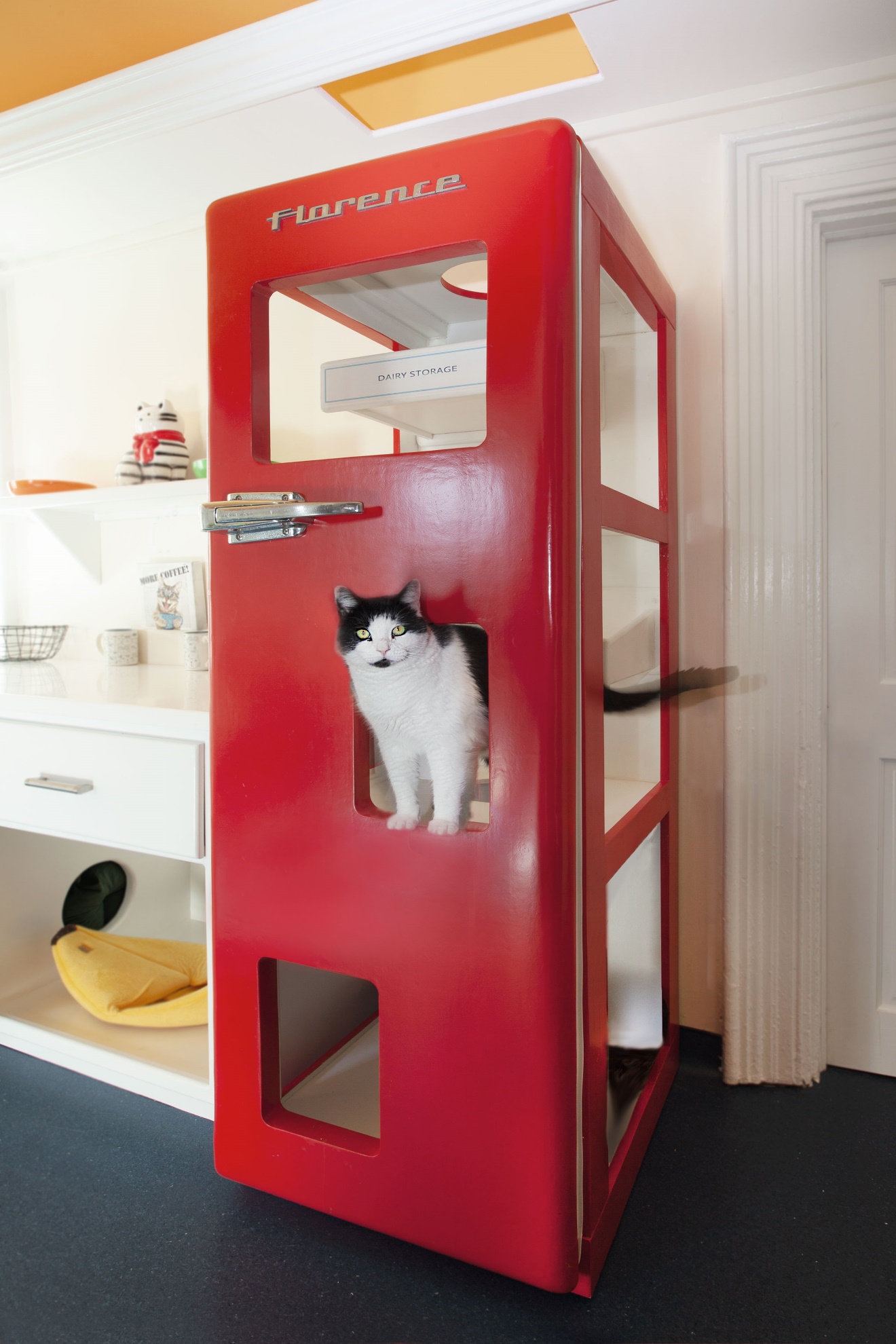 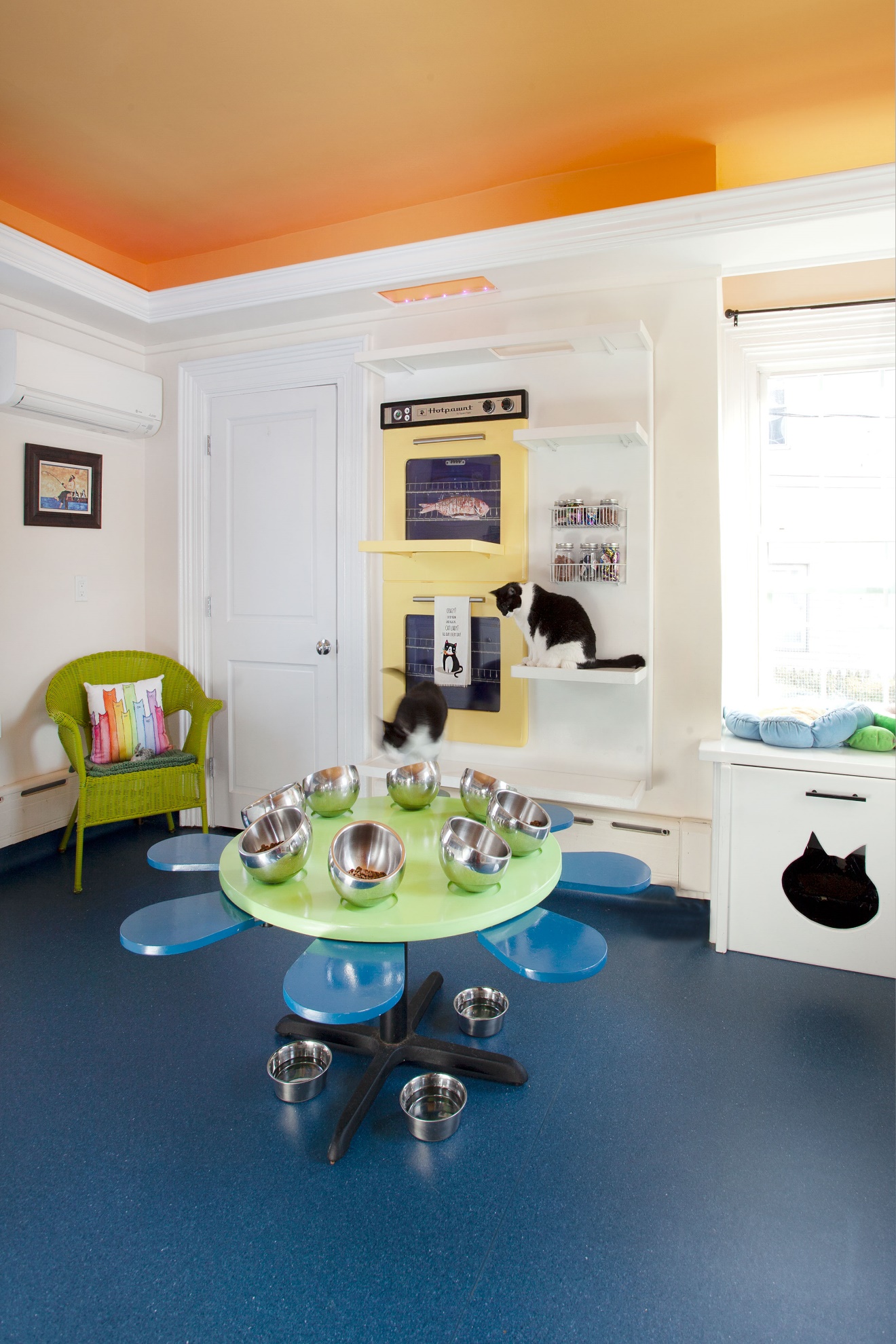 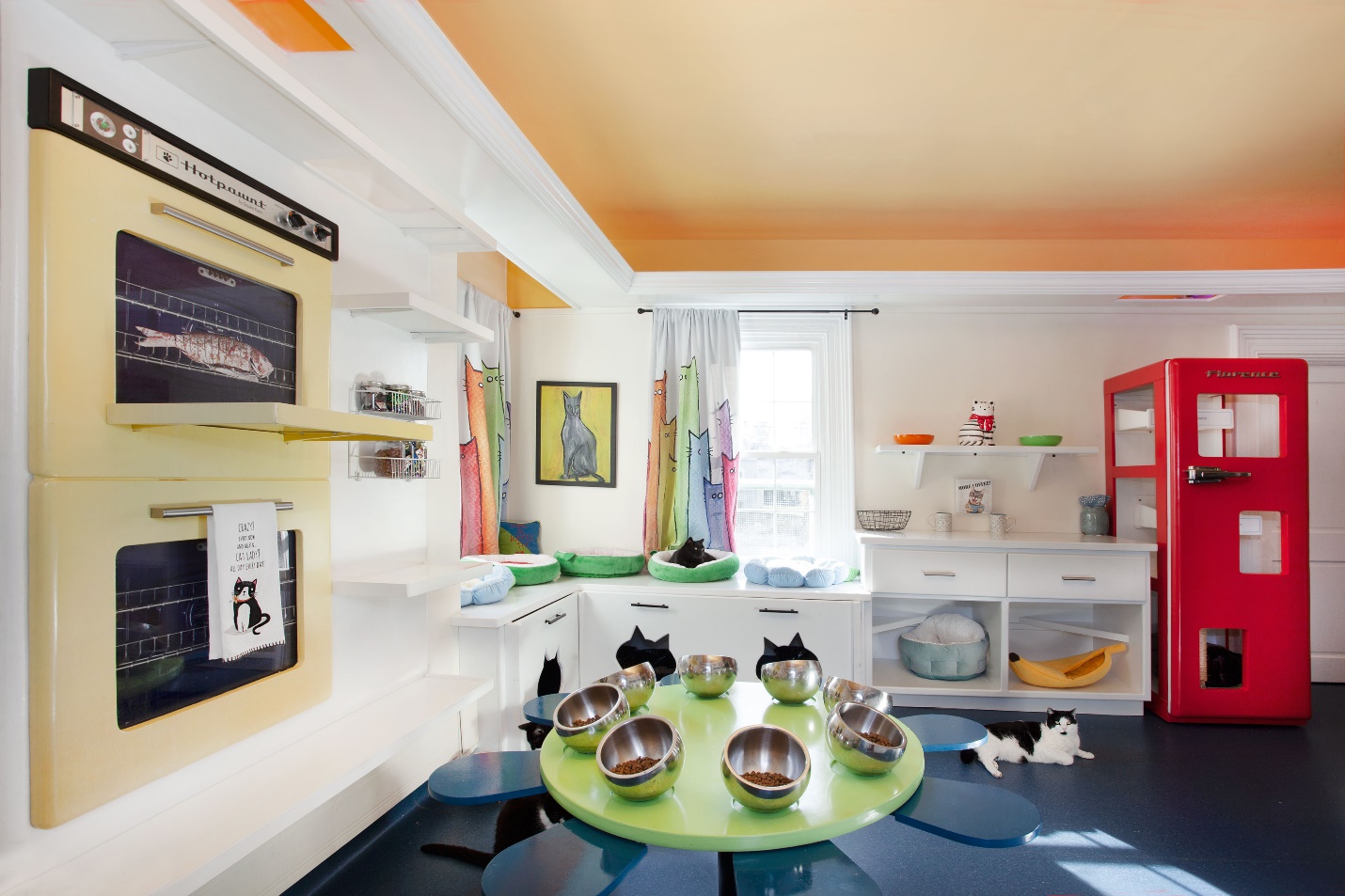 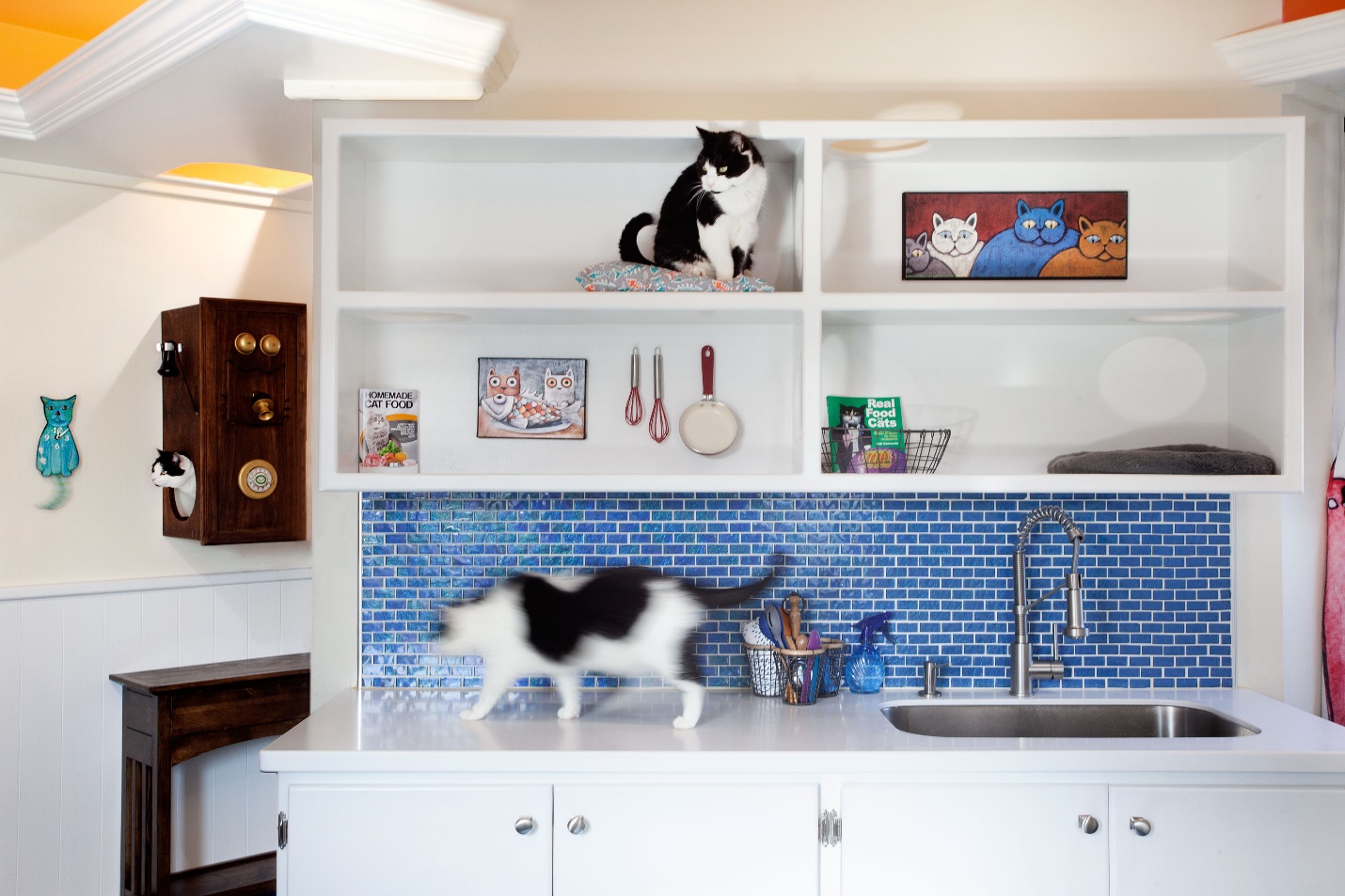 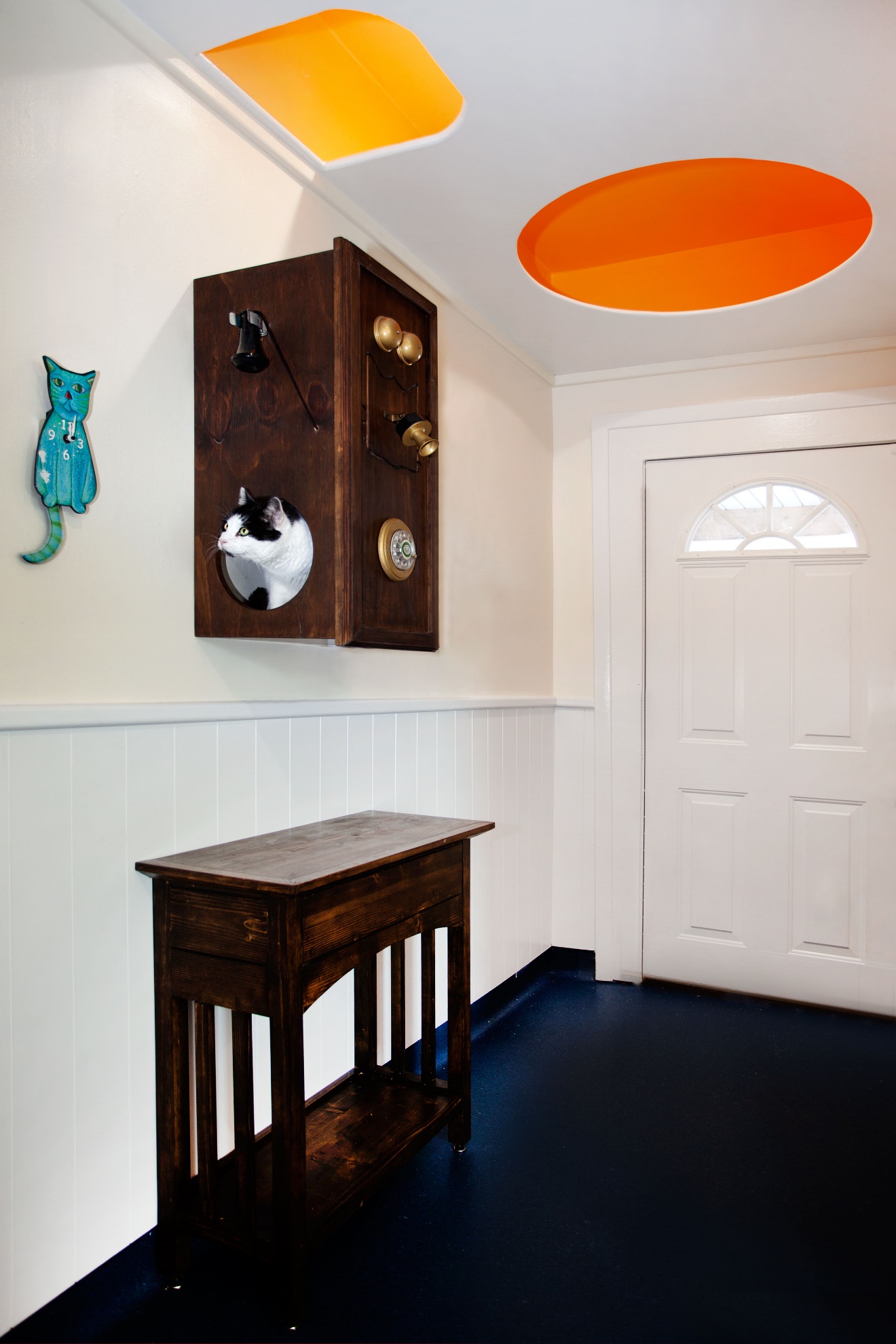 Downstairs, Square Paws planned for a 1960’s style recreation room with a console TV and mid-century modern shadowbox above. And the room known as Pat’s Cats would become an homage to Pat Ladew along with a replica of the front porch of the house, completely catified, naturally.

Roland and Gerwald Construction did all the demolition and finish work, as well as much of the “built-in” work. Square Paws built the various free-standing cat furniture items and several built-in features. The two teams’ work dovetailed together really well!

Square Paws selected the “people” furniture and curtains for the house as part of the design, making sure to reinforce the intended nod to mid-century modern design. And Square Paws connected Susan with artist Amy Payne, who does amazing animal portraits! Amy immortalized several of Ladew’s favorite family of cats, and we used those portraits to further bolster this idea that the cats are the owners of the house.

In addition, Susan was able to get in touch with an old friend of Pat Ladew’s, Swedish designer Anders Wenngren, who compiled a stunning graphic of all the articles as a tribute to Pat in the Pat’s Cats Room. 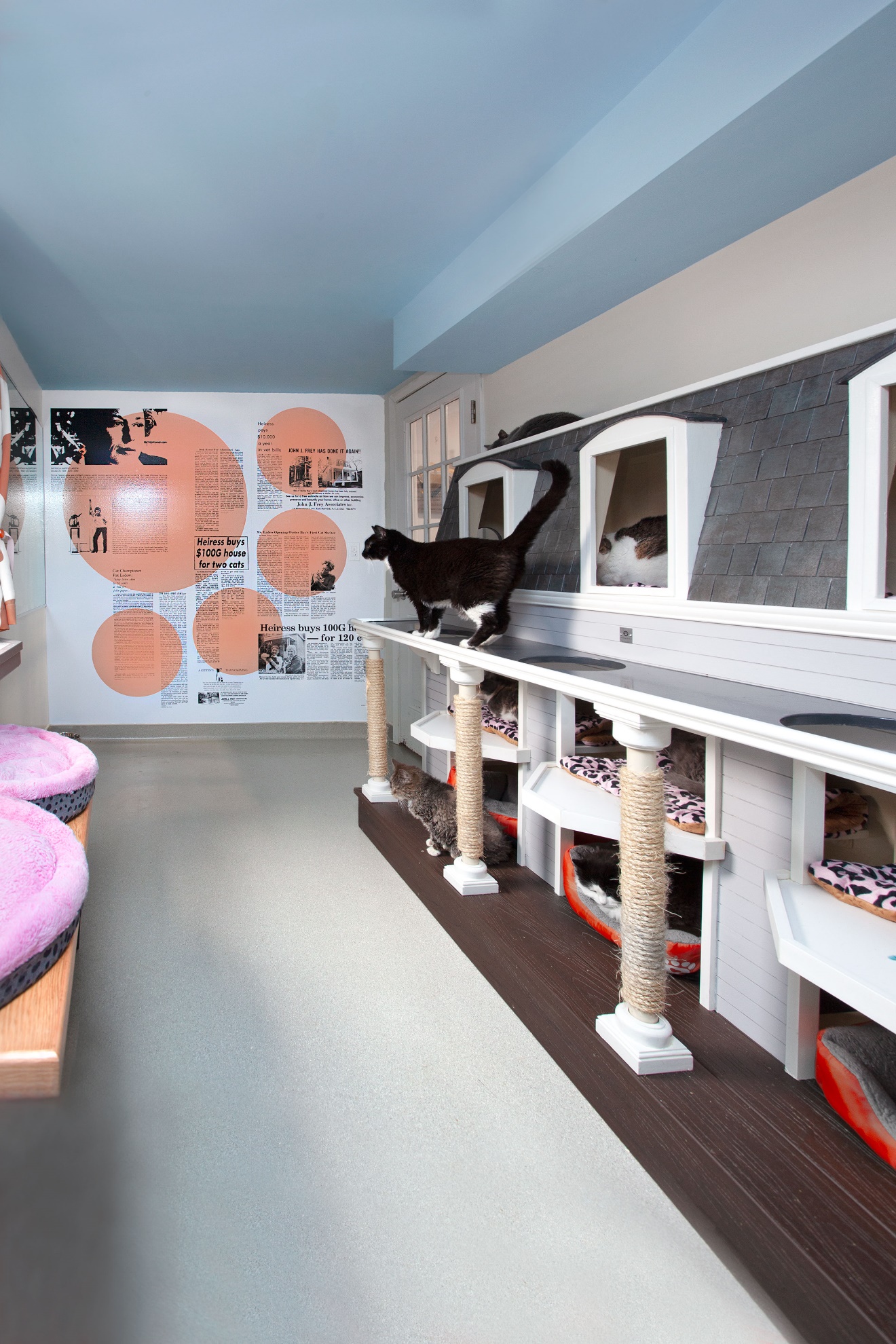 As the place began to transform, Susan and her staff got the “design bug” and had fun selecting pillows and cat beds that fit with the interior design. It was such great fun to foster that kind of client-involvement!

Square Paws was sure to use sustainable, washable finishes and scratchable sisal rope and woven sisal wherever possible, but always kept the intention of bright, powerful colors amidst more muted wall and floor tones. The result is a warm, friendly, cheerful place that we hope will provide years of happiness for the Patricia H. Ladew Foundation and many happy adoptions!