A cat welfare charity is offering advice on how to protect pets from cancerous sunburn during Sun Awareness Week (2-9 May) as global temperatures continue to rise.

The warning from Cats Protection comes after predictions that this year is set to be one of the hottest on record.

According to BBC Weather Presenter, Elizabeth Rizzini, the UK can generally expect summers to become warmer and drier and she warned of more frequent and intense weather extremes.

“We’re already seeing the effects of climate change across the country – 10 of our warmest summers on record have been since 2002 and heatwaves such as those seen in 2003 and 2018 are becoming much more likely,” she said.

Suffering from the effects of sun overexposure, pale-coloured cats Dibbs* and Gorgonzola* were recently brought into Cats Protection adoption centres. Both had severely sunburnt ear tips that had turned cancerous and needed to be removed.

Sarah Elliott, Central Veterinary Officer for Cats Protection, said: “White and pale-coloured cats don’t have a pigment called melanin in their skin, which is what protects humans from sunlight. This can leave them vulnerable to sun damage – usually around the ears. Over time, the damage caused by the sun’s ultraviolet rays can increase the risk of developing skin damage and cancer.

“Cats with unpigmented noses or ears are also much more susceptible to sun damage and require additional sun protection.”

Though both Dibbs and Gorgonzola have since recovered and now have new homes, the charity is keen to make cat owners aware of sun exposure risks, particularly as the UK faces warmer weather due to climate change.

Elizabeth Rizzini said: “The UK’s highest temperature ever recorded was 38.70C at Cambridge Botanical Gardens on 25 July 2019. However, the UK Met Office projects that heatwaves such as the one we saw in 2018 may well occur every other year by the time we get to 2050, and by 2070 summers could be up to 60C warmer. Temperatures have already risen on average by a degree across central and eastern areas of England.

“The slightly better news is that we could help to limit these changes by drastically reducing carbon emissions – but this will have to be done on a global scale according to the latest Intergovernmental Panel on Climate Change report released in April. There’s still time to mitigate the effects of climate change but according to scientists it’s now or never.”

Further tips on keeping cats safe in warm weather can be found at www.cats.org.uk/cats-and-warm-weather

Dibbs from Derby (12 years old) – Dibbs was brought to Cats Protection’s Derby Adoption Center with severe sun damage to the skin on the outer part of his ears (known as the ‘pinna’) and also tested FIV positive. He was rushed to a vet who found that the sun damage had caused skin cancer. Unfortunately, the vet was left with no choice but to remove the pinna section of both of his ears to stop the cancer from spreading. Despite being an older cat, Dibbs quickly found a loving new home and is settling in well. 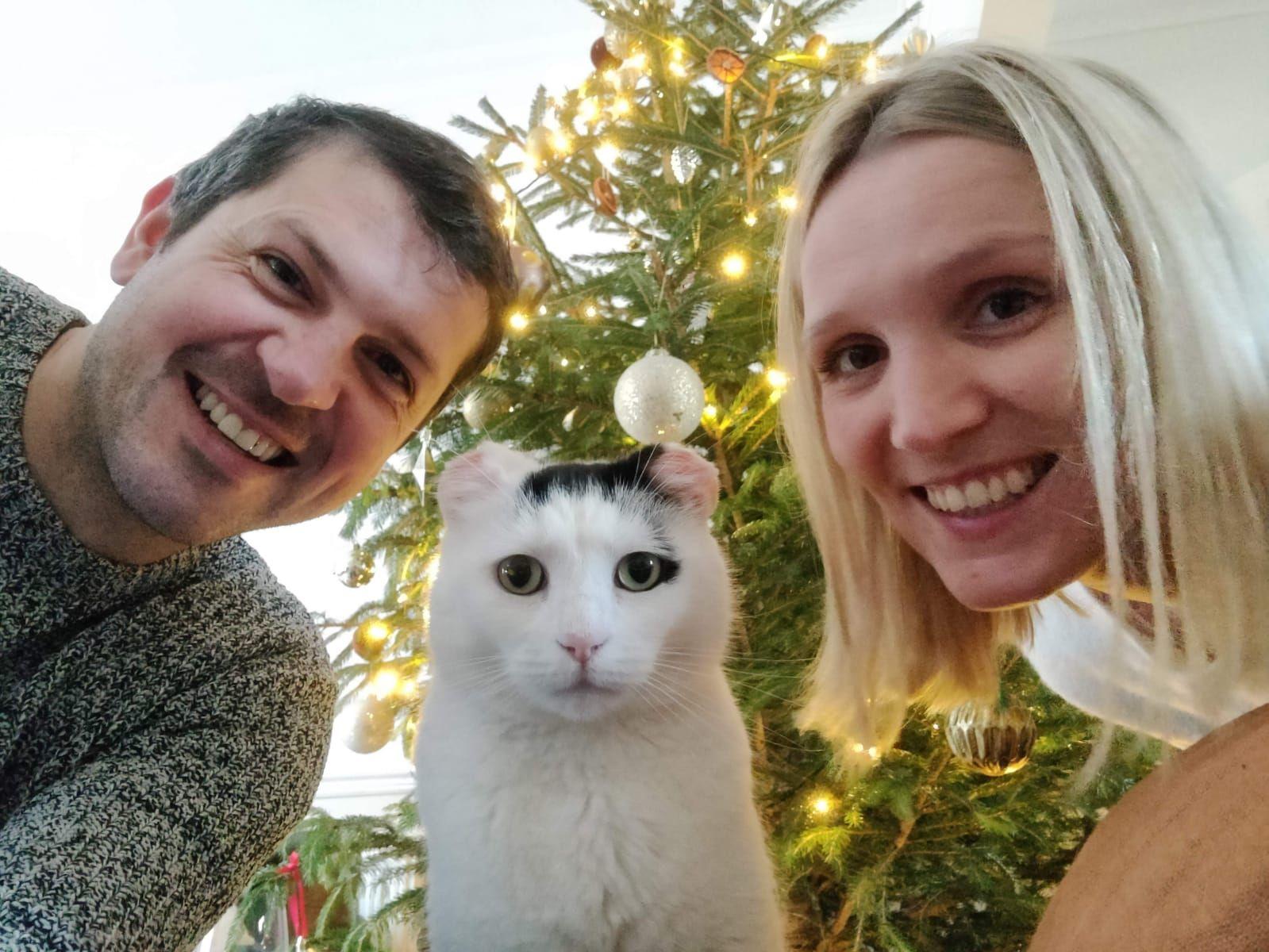 Dibbs’s new owner is Jordan Holmes, 22, from Derby. Jordan adopted Dibbs with partner Amy Hardy-Wolf, 19. Jordan said: “I was taken aback by Dibbs and his strange appearance. Reading his background, I felt so sorry for him and instantly decided that we needed to have him as part of our little family.”

“His little face with no ears made my heart break but I knew he would be just as wonderful as any other cat underneath! As soon as we brought him home, he was chilled out, lounging around and asking for cuddles and food constantly. Dibbs is the most gorgeous, cuddly, and affectionate cat I’ve ever had the pleasure of knowing. Wherever we are, he wants to be with us – he invites himself onto the sofa and into the bed!”

Gorgonzola from York (four years old)- The Mighty Gorgonzola (Gorgonzola for short) was adopted from Cats Protection’s York Adoption Center in October 2021. Gorgonzola sadly suffered severe sunburn and had to have the outer skin of his ears removed to ensure he could stay a healthy cat. Gorgonzola is now happily living with his new owners Helen and Shaun Gibbons in his forever home.

Gorgonzola’s new owner, Helen Gibbons, 33, from York, said: “It was love at first sight! As soon as I saw his picture on the website, I knew I was taking him home. He was the first cat we saw, and it was a match. He settled in straight away and quickly found his favorite spots around the home. 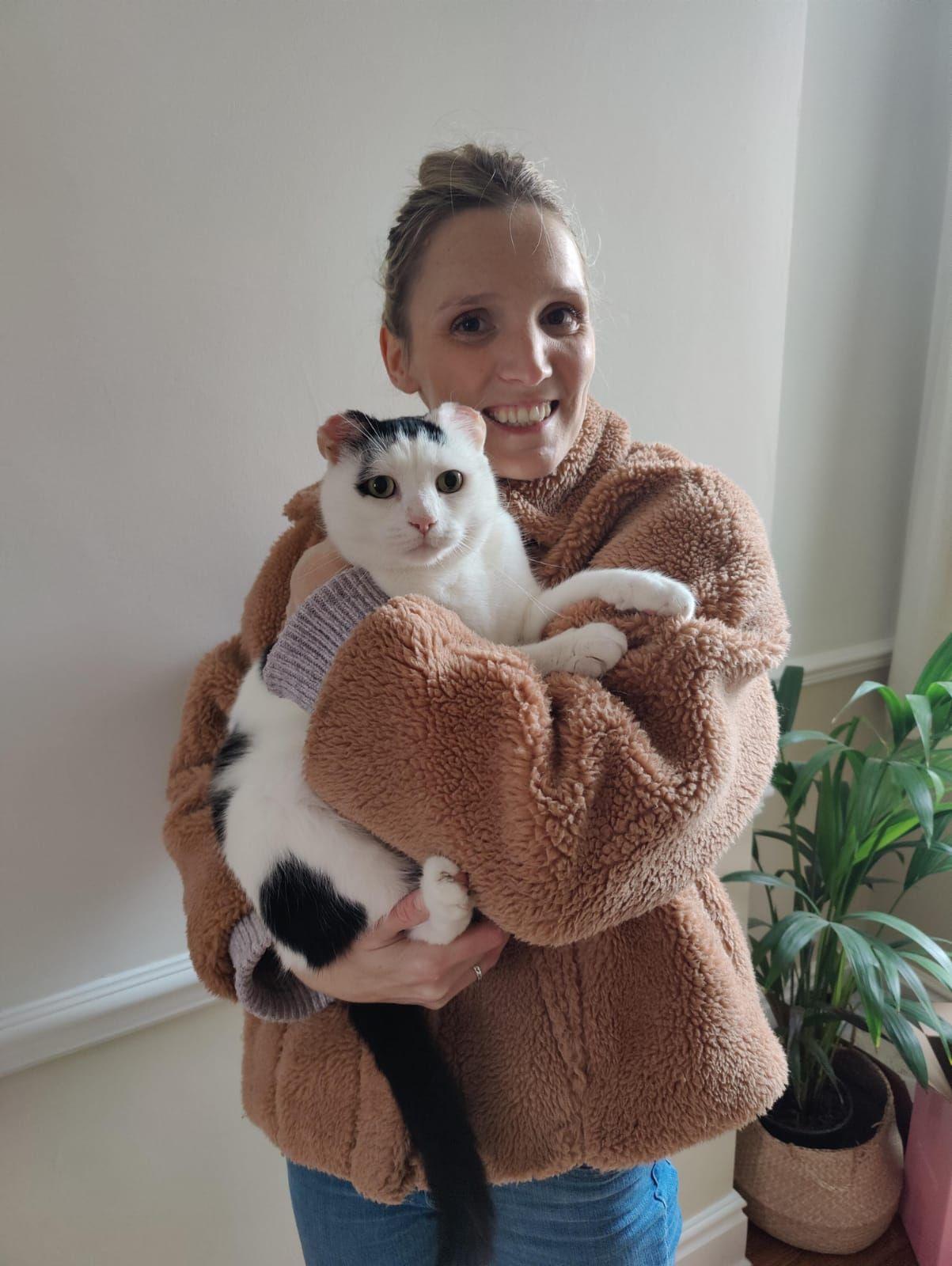 “Just like us humans, cats are prone to sunburn that can cause long-standing and irreversible damage. We should do all we can protect them from sun exposure by using sun cream, limiting their time outside during times of the day when the sun is at its strongest, and pulling blinds down to limit their exposure inside too. In the words of Baz Luhrmann ‘wear sunscreen’.

“Our poor Gorgonzola lost both of his ear lobes to sunburn and Cats Protection spent weeks caring for him before he came to us. He’s mostly white, so is more susceptible to sun damage. Now the weather is changing, we’ll be taking extra care to ensure he’s protected.”