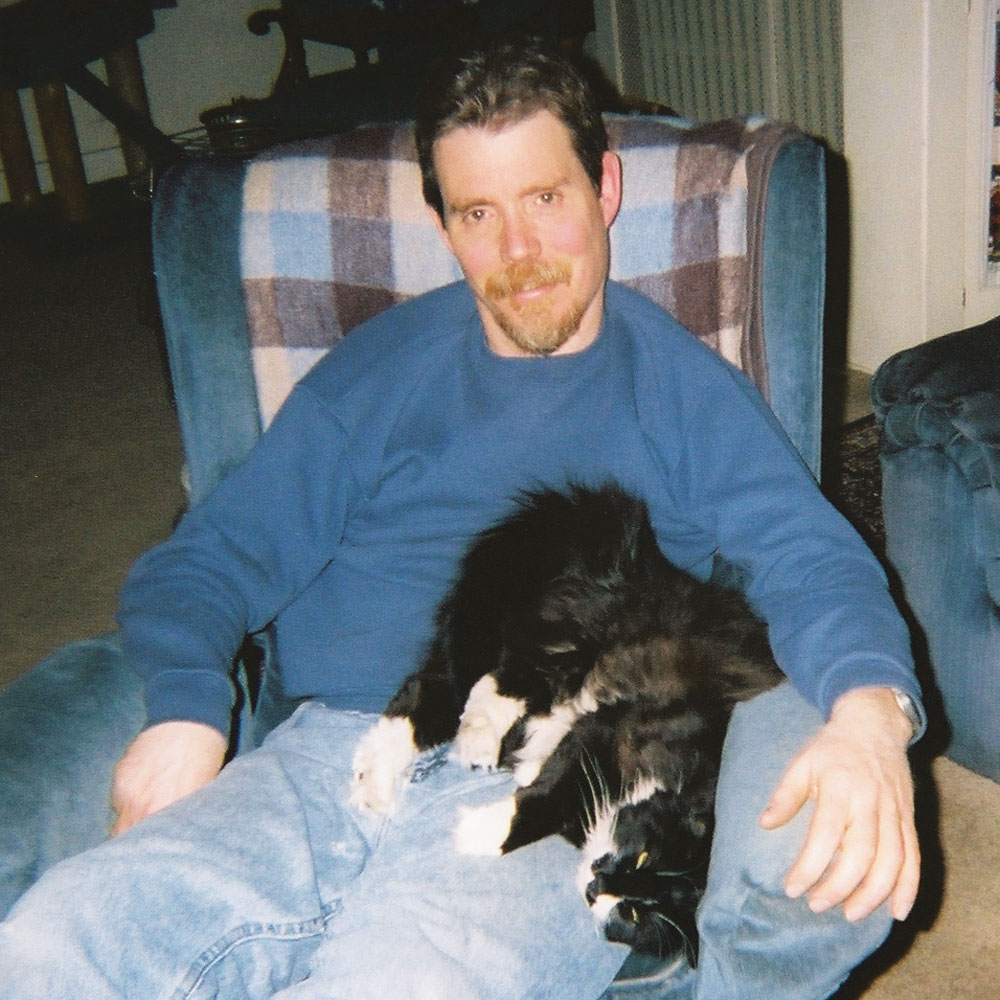 Frosty and their human, Greg

Frosty, who graced the world with her presence for 20 years, fell in love with my husband Greg the moment she joined our household. One of my favorite memories is when she would greet him at the door in the morning as he returned from work. He’d sit on the floor with his coffee, and Frosty would sit next to him. Greg would talk to her and she would chatter away, as if she was telling him about her day. They never knew that I would often sit in the hallway upstairs and listen. I loved their relationship.—Diane M Gooding 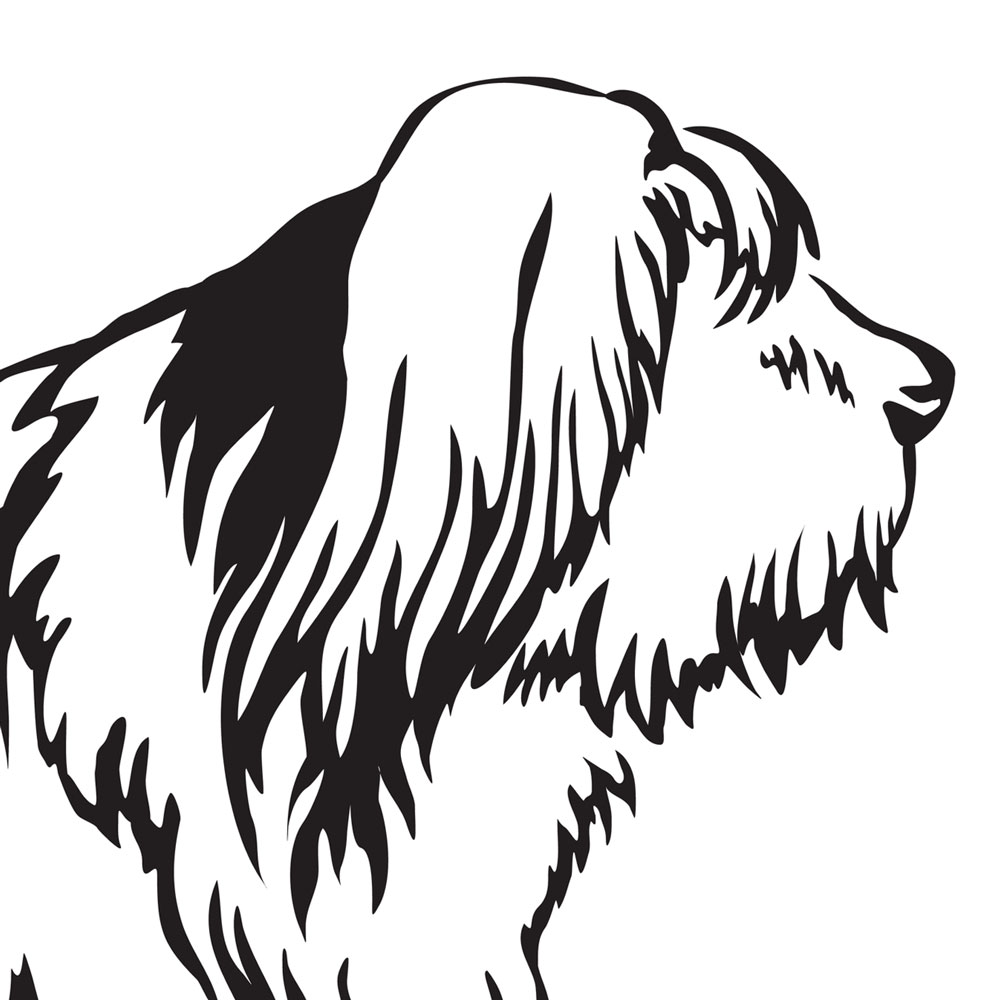 One cold winter day in 1988, our Old English Sheepdog, Sampson, brought home a wet and sickly kitten and insisted we keep him. We called him Winston and they became inseparable.

Winston was a wily kitty who would chase balls and dig in the garden right alongside his bestie. Eventually he learned how to open my mom’s basement bedroom window, but he never learned how to shut it.

One day, we heard Winston crying loudly in mom’s room and went to investigate. Sampson was stuck halfway inside the window. It was only the beginning of their lifelong, troublesome misadventures.—Michelle Gouldby 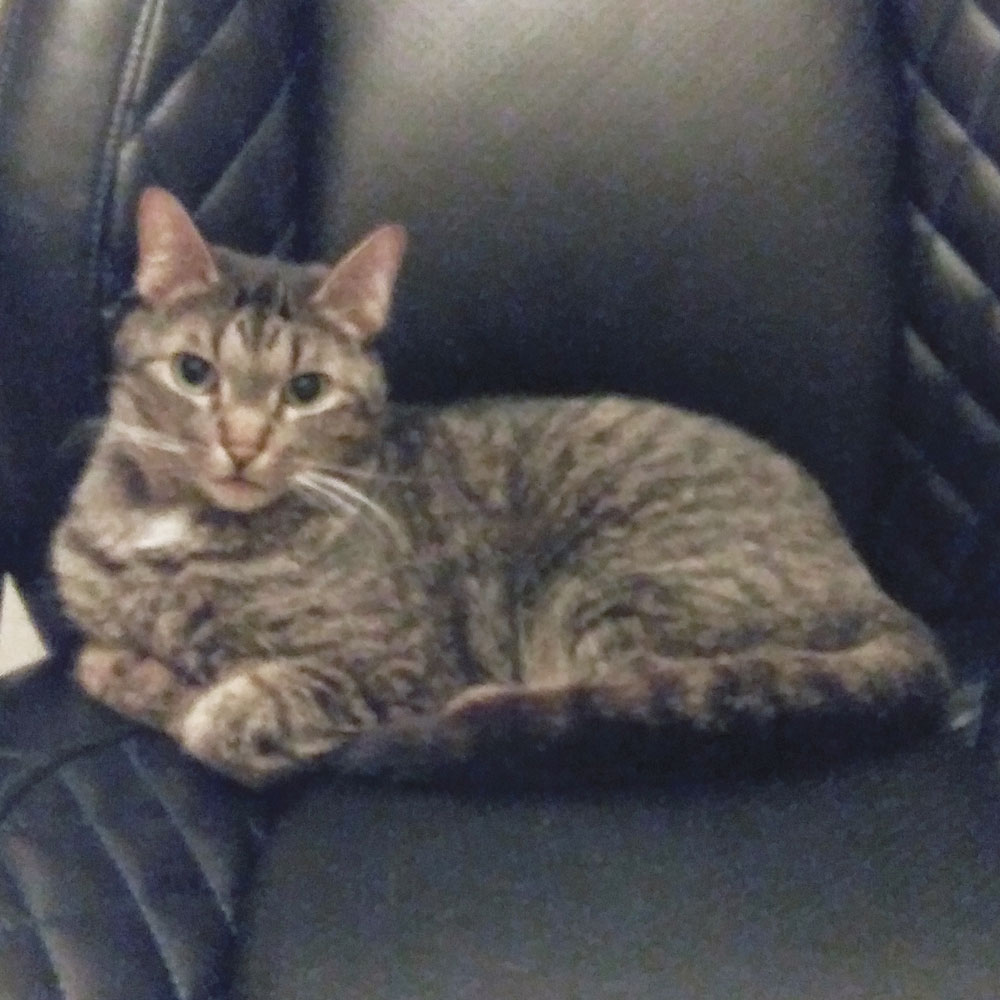 The One For Me

Watching the news, I saw the Humane Society asking for assistance in adopting a special needs kitty. They mentioned a cat that had cerebellar hypoplasia (CH) named Mr. Wobbles. My sister looked over and said, “He’s the one for you.” I quickly went over the next day and was able to adopt Mr. Wobbles. It’s been a year already and “special” is truly how I describe him. Not because of his handicap, but because he overcomes his daily obstacles. Mr. Wobbles runs around with no fear and gives me his trust. I did find “the one” and he definitely found me.—Mary Jane Diaz 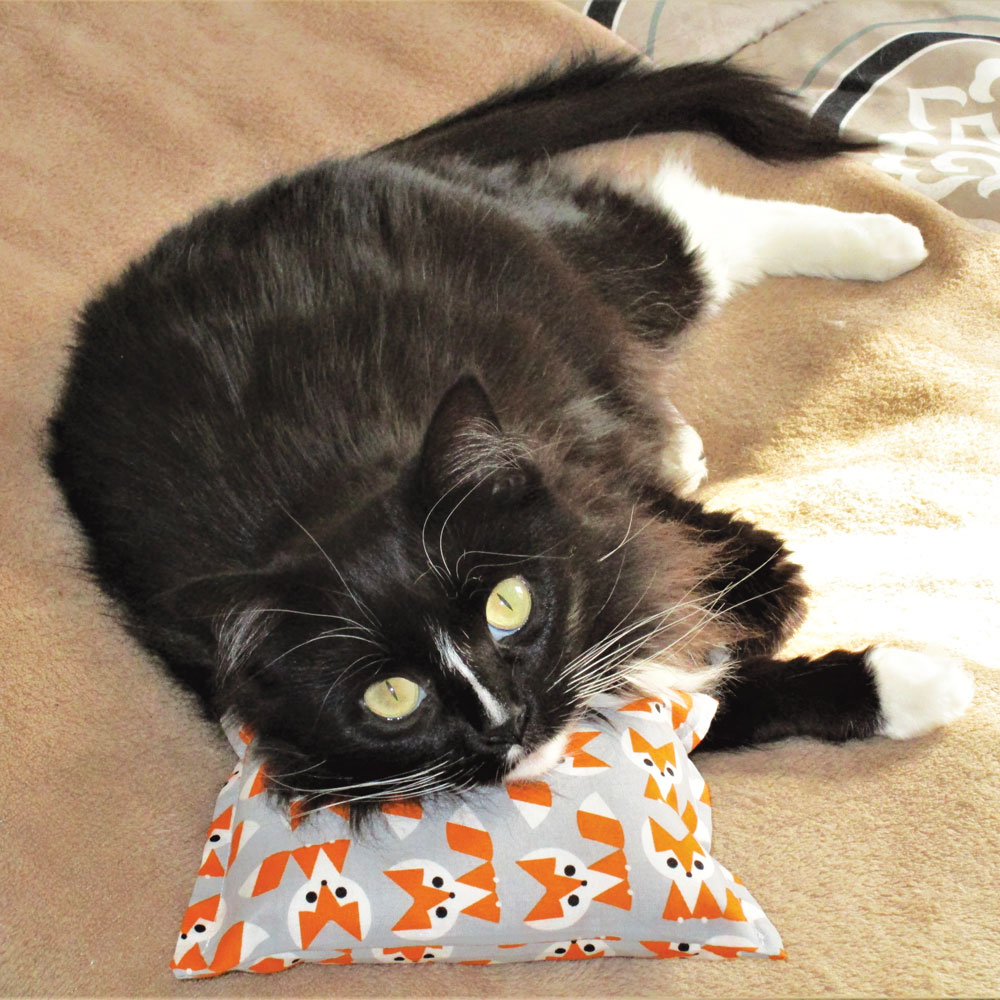 I went to the local shelter to make a donation and visit the cats. That’s where I met her, a tiny black and white kitty. She looked at me and purred loudly. I was instantly smitten!

What a lovely “Melody,” I thought, already naming her. Noticed her tail was missing fur and learned that it was due to a flea infestation allergy before she had been rescued. Didn’t let that stop me from adopting her. Four years later, Melody’s tail is now quite fluffy and gets even more so during her dinnertime excitement.—L. Ceglia 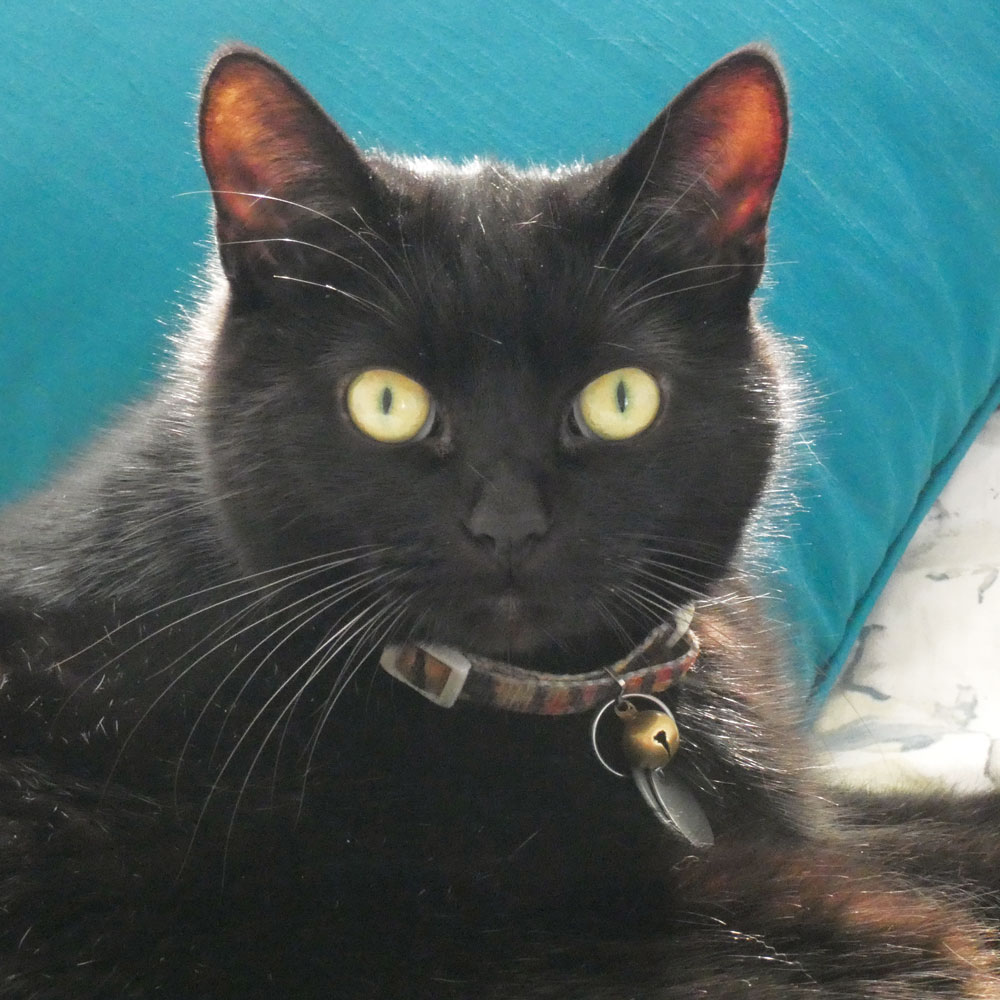 What do a retired Registered Nurse and a cat have in common? Well, they literally saved each other. I lived alone, adopted him when he was six months. When he turned eight years old, he’d frequently awake me during the night by bumping his head against mine. It took a while to figure out why until the penny dropped. I’d be loudly snoring and wake up gasping for air. My cat was on the alert. Eventually I was diagnosed with severe sleep apnea, now corrected with a CPAP machine. My cat diagnosed me. Love him to bits!—Connie Cook 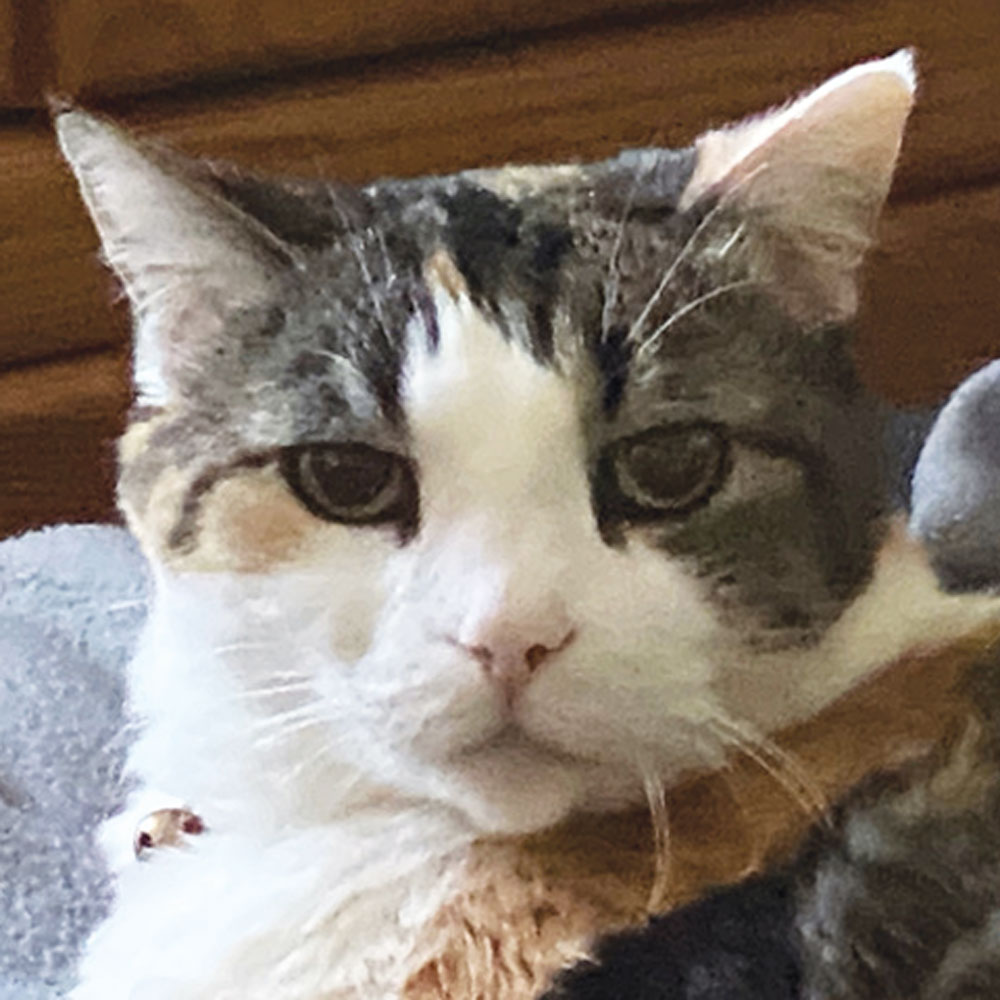 My husband and I imagine our cats as humans. Cricket, our leggy, Mensa caliber calico, would be a runway model/Noble prize recipient; Kato the corpulent, a department store Santa.

12 years ago, I shamelessly abandoned them. Calling home, their plaintive, highly dramatic meows reflected my betrayal. Two weeks later, I returned with a black Labrador in tow—without their written consent. Both balked; they didn’t agree to this new addition!

Did they know Portia was not a pet, but my highly valued guide dog? Probably not. But they extended their home to her with grace until she died yesterday.—Debra Cooper 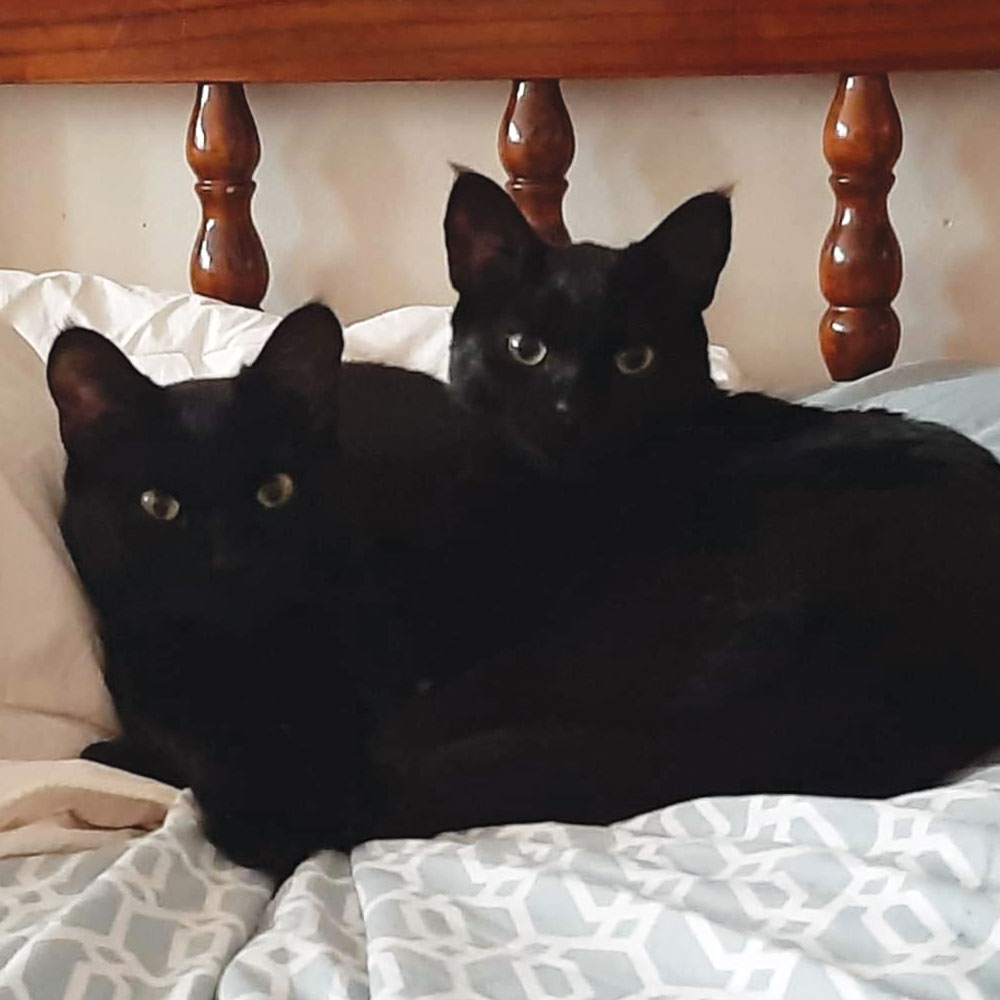 Madagascar (Maddy) and Gibraltar (Gibby) were siblings rescued from my local TNR program. During the Covid outbreak last year, the shelter had to give all the cats to fosters so I showed up to take two feral little kittens not knowing what to expect. The bond with these two was unreal and the pack mentality they had for me kept my mental health and addiction struggles in check. I was no longer lonely with my new family. They gave me courage to keep going, boundless happiness, and the desire to help others in need. I was blessed that day.—Rachelle Lohnes 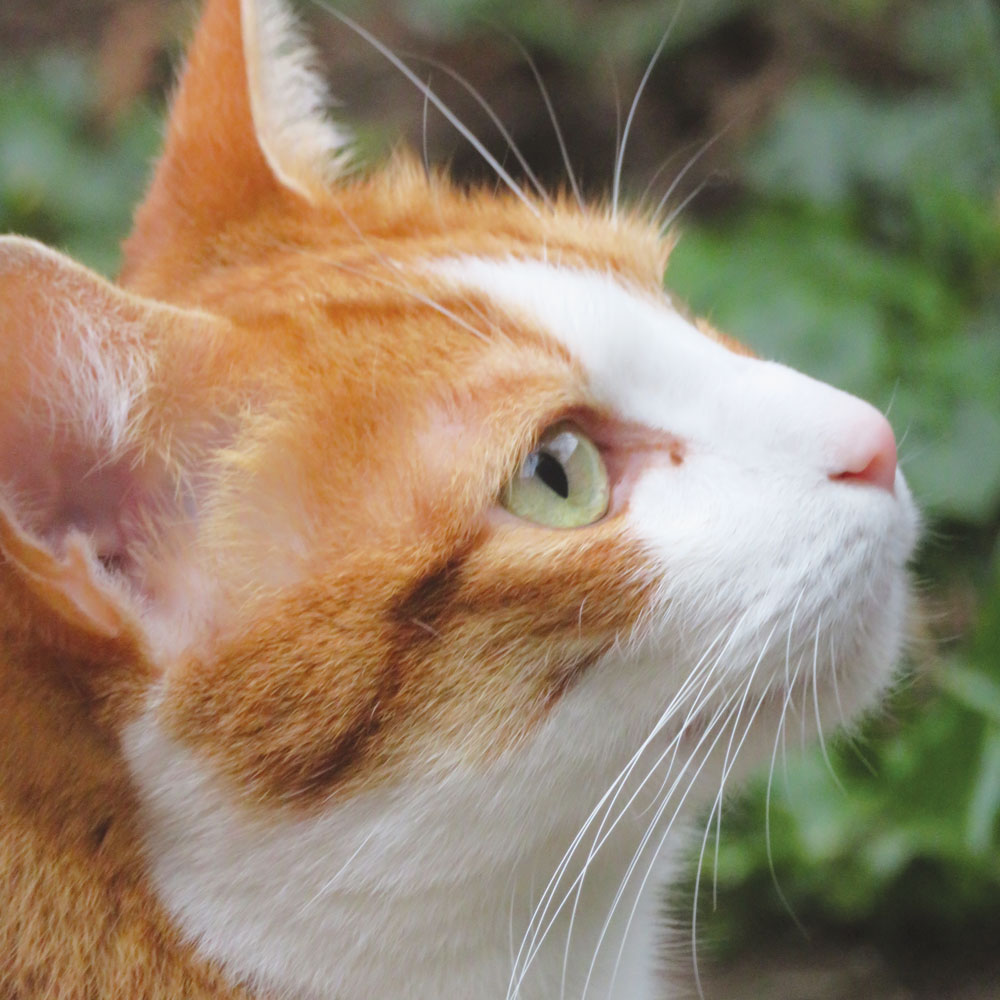 Filipos was born a street kitten. He was rescued from a car engine on Syros, Greece.

I adopted him through a wonderful charity. He has proved to be the most affectionate of lap cats.

Sometimes though his desire to be always beside me gets him into trouble.

One day, I was taking a bath. Filipos decided he should be on my lap and leaped into the bath to join me.

The water gave him a shock and he fled dripping down the stairs at such speed that my poor cleaning lady had a fright. 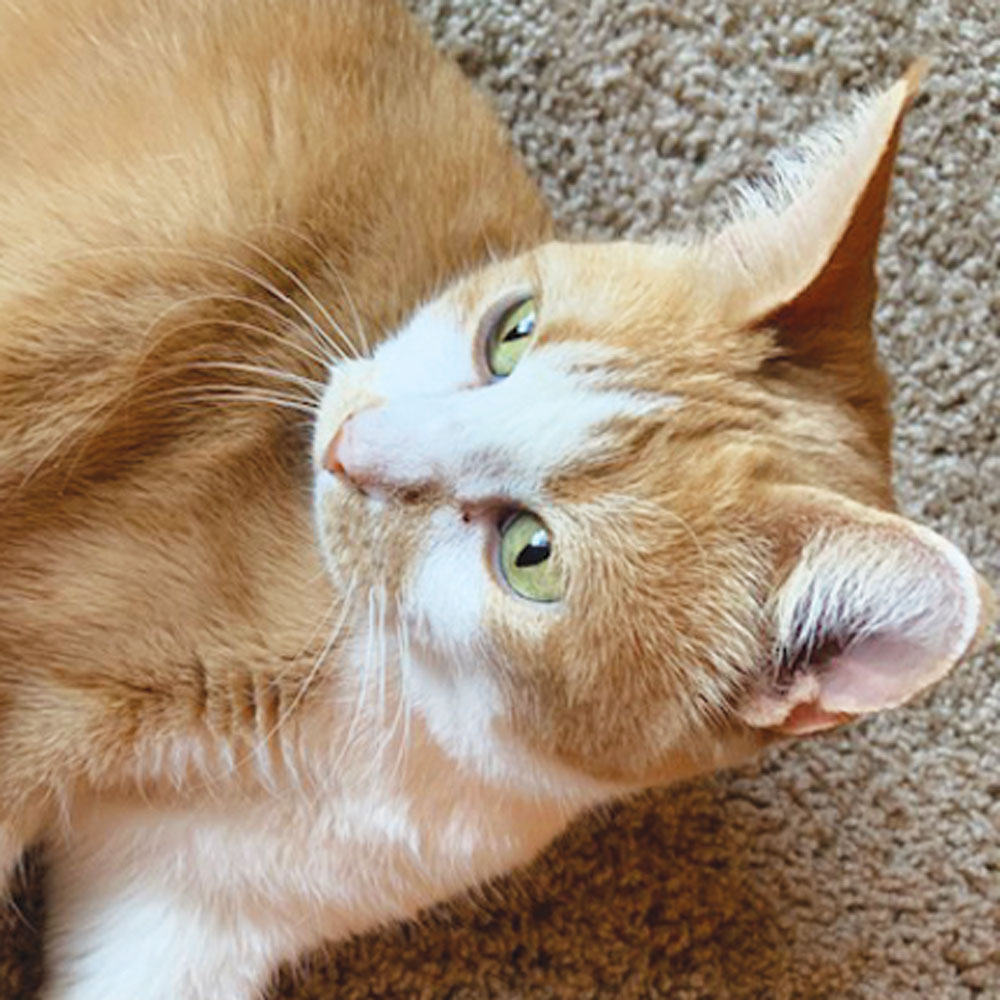 “Meeoow!” Purrl calls out into the dark. Her white paws batting the catnip-laced mouse to and fro’ around the maple chair legs. A fierce huntress cloaked in her fur of orange and gold. Then, suddenly, the sound of running paws on the carpet and a bold pounce up onto the bed, with catch in mouth. She noisily chirps and bats her prey all around my quilt-covered feet and legs. For a brief second, even I am convinced. I quickly switch on the bedside lamp, relieved to find, once again, that her mouse truly is made of gray felt and fiberfill.—Brandy Conyers

The House of Misfit Cats

First, we adopted Snuggy, a beautiful tortoiseshell kitty with partial facial paralysis. She loved my husband most. That is until he gave her eye ointment for a week. She’s been a mama’s girl since. Second, we adopted gray Gwendolyn, found as a stray and missing part of her tail. She is a sweet loving girl but required a frisky friend. Third, we adopted striped, overweight Bean. She became best friends with Gwendolyn. With only adult cats in the home, we needed some kitten energy so adopted Edgar. A boy kitty perked up everyone’s energy level!—Carolyn Fenzl 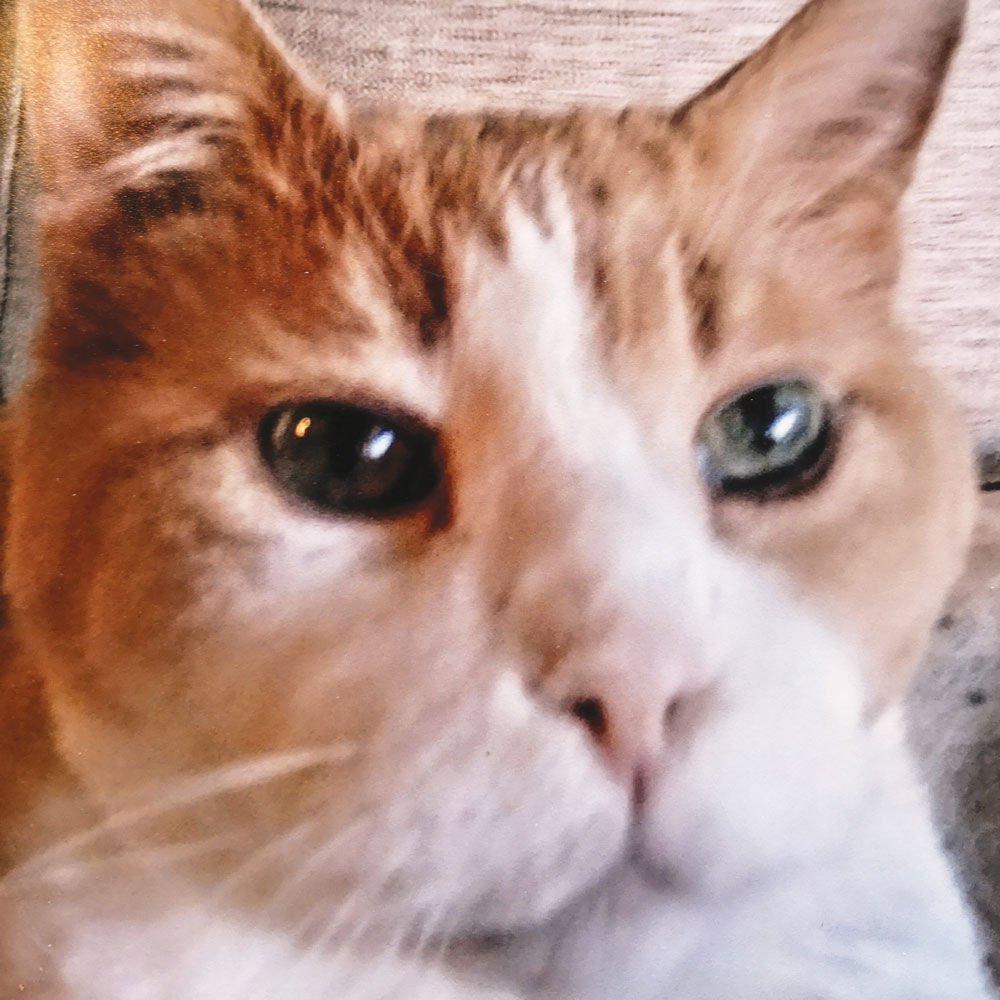 Who Wants to be My Kitty?

Nightly love-ins at the cat shelter weren’t enough. I needed a kitty. With overwhelming numbers of deserving felines, I left the choice to them.

Bellowing, “OK, listen up. Who wants to be my kitty?” promoted a small Calico X with a peach-colored derriere to position herself on my lap.

Aware, her friend, a pumpkin-looking Tom swiftly joined us. Home we went and happily aged as years folded into decades.

When Pumpkin was 17, he asked to join other kitties in heaven. We agreed. Sadly.

At 20, three years later, when once more asked who wanted to be their kitty, with Peaches response she too crossed the Rainbow Bridge.—Moneca Litton Graham 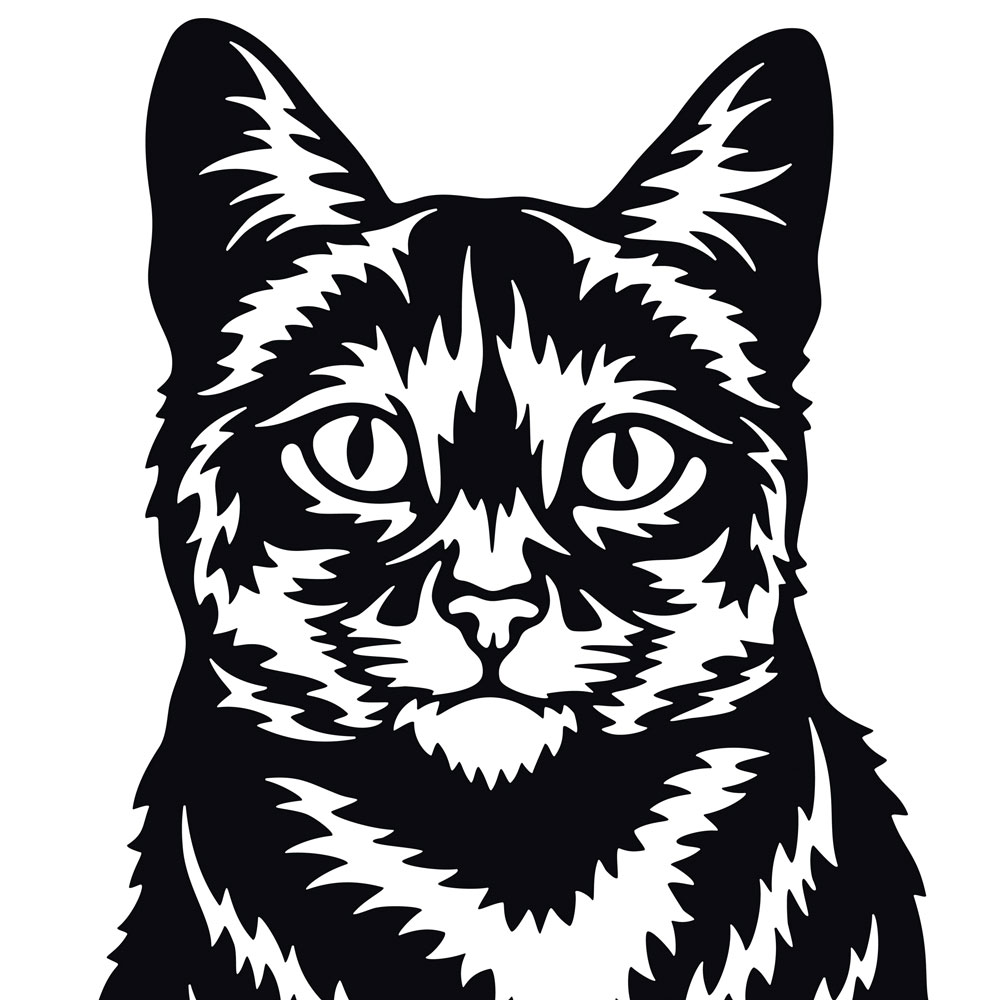 My Cat Saved My Life

My kitty, whose name is Puss Puss, saved my life when my house was on fire and I did not know it. He came in my room while I was asleep and got in my face, hollering at me in an unusual manner. I got up to put him out of the room and my whole house was full of flames and smoke. If it wasn’t for him I would not be here.—Ann Lockett

Get published in Modern Cat! Submit your cat story of no more than 100 words (word count strictly enforced) to tinycatstories@moderncat.com. By submitting you are consenting to publication of your story.