Falling in love with a cat is no different than falling in love with a person. Sometimes, it’s love at first sight. That’s what happened for me when I saw Buckley, the subject of my first book, Buckley’s Story: Lessons from a Feline Master Teacher, in a cage in the back of the animal hospital I managed at the time. I fell in love instantly.

Other times, it’s a slower process. You may take in a stray because she showed up in your yard. You may end up with someone else’s cat because she needed a new home. You’re happy to help this cat and provide a safe home for her. You like having her around, but you’re not sure she’s really the right cat for you. Maybe you’re even telling yourself that you’re just fostering her until you can find a new home for her. And then, one day, you realize that somehow, this cat that you weren’t sure about at all has made her way into your heart, and your life is forever changed.

Amber was that cat for me.

On a warm spring day, Amber and her five kittens were brought to the animal hospital by a client who had found the little family in her barn. Amber was skinny and dirty, but her eventual beauty was evident even then. She was a dark tortoiseshell color, with an amber-colored heart-shaped spot on top of her head, which became the reason for her name.

Once the little family was cleaned up, we put them up for adoption. Amber’s kittens found new homes fairly quickly, but nobody was interested in the beautiful mommy cat. She spent her days in the big adoption cage in the hospital’s waiting area, but with the constant inflow of homeless kittens that is typical for spring and summer, nobody wanted to adopt an adult cat.

I had recently lost my almost sixteen-year-old soul mate cat Feebee, and the grief over his loss was still very fresh. I did not think I was ready for another cat, but coming home to an empty house was becoming difficult. 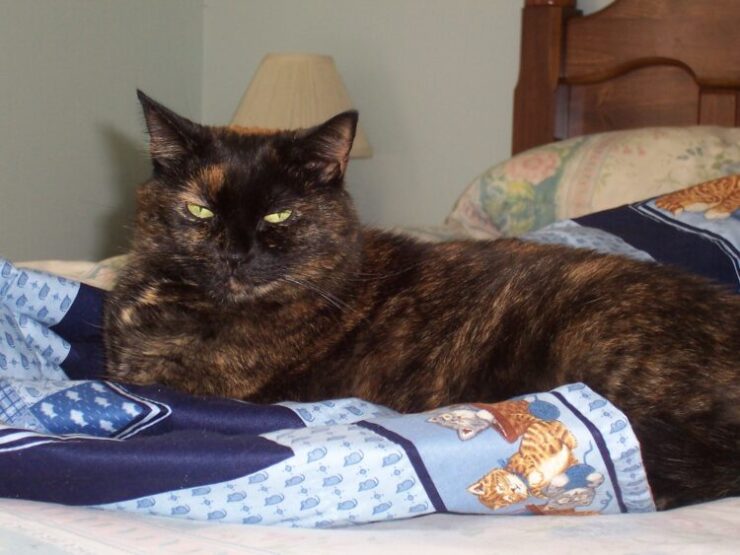 One weekend in July, I decided to take Amber home, “just for the weekend”. I wanted to give her a break from the abandoned feral kitten we had placed with her after her own kittens had all found homes. Amber was becoming exasperated with the rambunctious kitten constant need for attention. As far as she was concerned, she had done her mommy duty with her own kittens.

After living in a cage for all these months, Amber was initially a little overwhelmed by having access to an entire house, and she spent most of that first weekend near or under my bed. By Sunday evening, she had relaxed a little and started exploring her new environment. I liked having her gentle and peaceful energy around the house, and I decided that she could stay a little longer. I told everyone that I was “just fostering her”.

This was in the days before social media, so I made up flyers advertising that she was available for adoption. Remember those flyers with the little tear off tabs? Well, somehow, the flyers never got distributed.

I liked having this sweet, unassuming, almost self-effacing cat around. Her gentle energy created a quiet, peaceful space both physically and figuratively, which helped my grieving heart heal.

Finally, three months after I first brought her home, I acknowledged that she wasn’t going anywhere. I officially adopted her, joining the ranks of “foster failures” (people who foster cats but aren’t able to give them up), and she only returned to the animal hospital for regular check ups.

Once I completely opened my heart to her, I realized that she was a wise old soul. Her peaceful and solid presence, not to mention her almost constant purr, brought love and affection into my life every day for ten years.

She was a teacher to the very core of her being, and she not only became my writing muse, she became the inspiration for The Conscious Cat. While I was writing Buckley’s Story, I was also trying to learn as much as I could about book publishing and marketing. How was I going to tell the world about this book, and how was I going to reach a wide audience so they, too, could benefit from the lessons this little cat had taught me? 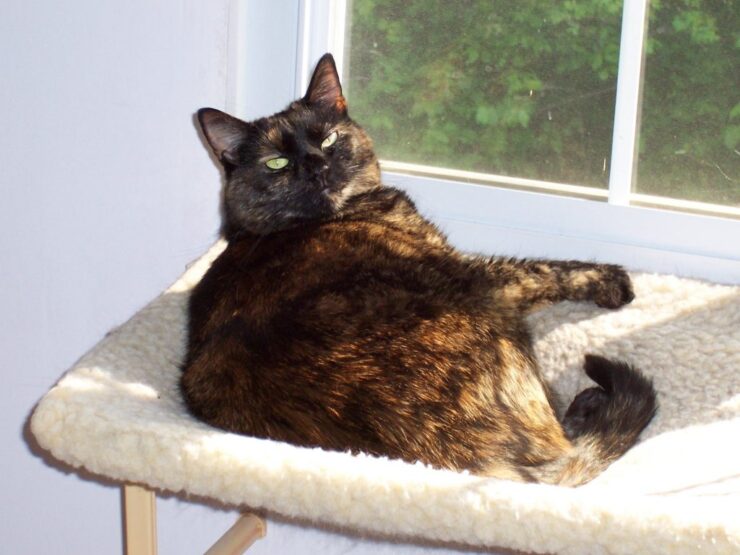 One day, feeling overwhelmed by all of it, I was sitting in front of the computer staring at the blank screen, desperately trying to come up with some ideas for a marketing plan. I looked up and there was Amber, curled up on the window perch next to my desk for a long nap. And all of a sudden, it was as clear to me as if she had said the words: I’m going to start a blog, and I’m going to call it The Conscious Cat. It would focus on conscious living, health and happiness for cats and their humans.

Animals come into our lives for many reasons. Some very special animals touch our souls. Amber’s innate wisdom inspired me to tap deeper into my own intuition and inner knowledge, and to share it with the world. She was the original Conscious Cat.

Sometimes, it’s the quiet cats that leave the biggest paw prints on our hearts. We can’t always explain rationally why we’re so drawn to a particular cat, but we are forever changed by these soul cats. A soul mate relationship, whether it’s with a cat or a human, not only enriches our life beyond imagination, it also forces us to grow both personally and spiritually. Amber did all of that and more for me.

Sadly, Amber passed away in May of 2010 after a sudden, brief illness. I will always miss her, but her legacy lives on in my work.